Another 37 C day in Limoux! 98 Fahrenheit. The heat is cumulative and defeating. Makes it difficult for hiking and exploring…depleting. Some days it feels as though there just isn’t enough

Bored male leaders massaging their EGO’s and need for greed contemplating annihilation for the win.

‘UN Chief Antonio Guterres has called for the end of military operation around Europe’s largest nuclear plant, hit with a series of bombardments since last Friday, with both Russian and Ukrainian forces blaming one another for the attacks. “Any attack on nuclear power plants is a suicidal thing,” the UN’s secretary-general told reporters in Tokyo. “I hope that the IAEA [International Atomic Energy Agency] will be able to access the power plant.” Nuclear risks to humanity are only “a misunderstanindng” way from nuclear annihilation.’

History is an endless argument.

There are two paths you can go by, but in the long run, there’s still time to change the road you’re on, and it makes me wonder.’

The 7th Generation Principle is based on an ancient Iroquois philosophy that the decisions we make today should result in a sustainable world seven generations into the future.

This is encouraging. It means that we have both the power and the responsibility to aim the trajectory of civilization in a positive direction, the idea that positively influencing the long-term future is a key moral priority of our time.’

“Here in Japan, paper cranes symbolize the hope for a future without nuclear weapons. There is only one solution to the nuclear threat: not to have nuclear weapons at all.”

-António Guterres, Security-General of the U.N.

Let’s make more paper cranes, and use old telephones, and refrigerate without Chlorofluorocarbons (CFCs), compounds released into the atmosphere since the 1930s through air-conditioning, refrigeration, blowing agents in foams, insulations and packing materials, propellants in aerosol cans, and as solvents.

‘How to Relive the Pleasures of a Landline’ 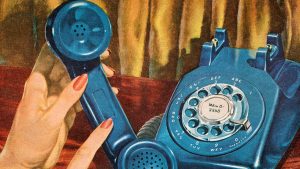 From The New Yorker’s Rachel Syme.

“If you call me and I am at home, chances are you are going to reach me on an actual, old-fashioned, dial-’em-up telephone. The one that currently sits on my desk is a putty-colored rotary model circa the nineteen-sixties, with a weighted handset and a long, sproingy, yellowing cord that scrunches pleasantly between the fingers like al dente fusilli. I purchased this particular phone last fall, on eBay, for $19.99. You can find far pricier vintage telephones on that site, of course—retro phones in Instagram-friendly colors such as avocado green and Barbie pink.”

“It makes me feel glamorous and put together to grab my vintage receiver, even if I am still in my pajamas.” 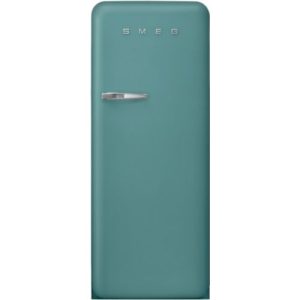 Most of what we encounter is driven by emotions, and our emotions are always relative. When we’re shopping for a car or an avocado, we’re buying the way it makes us feel, not how it would make someone else feel. -Seth Godin

Emotion, perhaps why grace and forgiveness, although the Universe’s natural default, or so difficult for humans to feel, and choose.

Dualism…non-dualism. Reading and researching on the tenets of the Cathar philosophy, their way of living and belief, versus, the Nicene Council Christianity begat in the 4th century anno domini by then Roman Emperor Constantine.

Fr Richard Rohr, whom I adore, gets in the weeds, I think when he promotes non-dualism in religion.

“The body is rightly reasserting its goodness and importance. Can we somehow honor both body and spirit together? When Christianity is in any way anti-body, it is not authentic (?) Christianity. The incarnation tells us that body and spirit must fully operate and be respected as one.”

He then tries to forward his argument with behavioral psychology.

“Many Christians falsely assumed that if they could “die” to their body, their spirit would for some reason miraculously arise. Often the opposite was the case. After centuries of body rejection, and the lack of any positive body theology, the West is now trapped in substance addiction, obesity, anorexia, bulimia, plastic surgery, and an obsession with appearance and preserving these bodies. Our poor bodies, which Jesus affirmed, have become the receptacles of so much negativity and obsession.”

Juxtapose this with the Cathar belief, and the reason they were massacred, often burned at the stake, by the hundreds of thousands, most likely a million murdered. The writing offered by Nick Lambert, from the book, ‘The Cathar View.’

“The eternal battle of good and evil deities is at the centre of the Cathar worldview and although this belief came in a variety of forms, they were very similar to the dualistic faiths were specifically prohibited by orthodox Christianity (Constantine): the Gnostics, the Manichaeans, the Paulicians and the Bogomils of the Balkans. It is upon the issue of dualism that much of the excitement and controversy around the Cathars rests. Absolute dualism is the position adopted in the Book of Two Principles:

‘The good God is not the creator of the base and tangible elements of this world; another creator is responsible for them. God is alright but not in the sense that He can create evil; what He does not desire He cannot do. He is omnipotent over all good things, but there must be another creator form whom all evils flow, who in no way derives from the good God. The evil one is eternal, as are his works.’

The key word being ‘works.’ Works, in humanity, through the body, choices and behaviors, are from the material world, and the material world is the ‘body.’ Pretty sure when the body dies, the body and soul are separated. Otherwise, yikes. Christians, beginning in the 4th century, start dancing around this and never stop. For the Cathars, it wasn’t that confusing. And most were absolute.

“The dualist explanation of good and evil gods was less equivocal than this compromise, and the spread of the Cathars show how compelling it for many people. It was silly more consistent, given the state of the world, to attribute equal powers to the contending gods. Another factor was the ‘jealous god’ of Moses and the Israelites, and the peaceful philosophy of Jesus and his Apostles. […] Strong echoes of this cosmology are found centuries later in William Blake’s radical interpretations of the Bible, (like the) Old Testament’s Jehovah, and Blake cast him as an implacable figure, conveying something of his antithetical and flawed creative powers as the Cathars one saw them.”

“Dualism, then, was the fulcrum about which the rest of Cathar beliefs turned, informing their eschatology (they did not, it seems, subscribe to an apocalyptic Day of Judgment because they did not believe in the resurrection of the body). This belief in reincarnation likely derived from Neo-platonism and the ancient Greek philosophy of metempsychosis. The transmigration of souls was specifically opposed in Christianity but became a central tenet of Catharsis, and the ascension that they aimed for was a liberation from the constant cycle of death and rebirth, rather similar to Buddhist beliefs. and Manichaeism.” 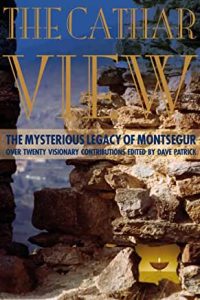 Dualism, the reason Bérenger Saunière included the ruler of earthly evil, Rex Mundi, in his church dedicated to Mary Magdalene after he made his parchment discoveries hidden away for centuries on the grounds of Rennes-les-Chateau. 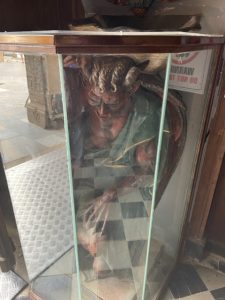 [Rex Mundi now behind protective plexiglass because someone tried to destroy it once. If you don’t agree, then annihilate. Your thoughts, Pope (not so) Innocent III.]

When you V O T E  in the U.S. midterms, remember these faces and names. These are the senators, men, who cow-tailed to their dark money lobbyists. This is who they show allegiance, not their constituents, who are in need and in diabetic health crisis. 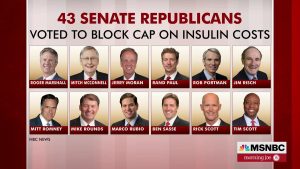 ‘The past is past; nothing can change it. But the future depends on the present; we still have the opportunity to shape it. This is not a matter of employing technology or spending more money, it’s a question of developing a sense of concern for others’ well-being.’