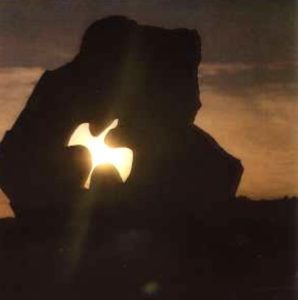 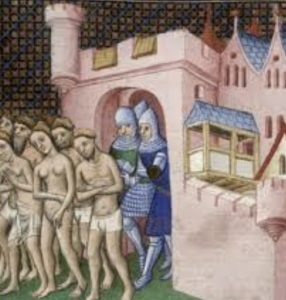 ‘The stone with the Dove is to be found at Minerve, in Southern France at the site of an ancient Cathafortress near the region Rennes Le Chateau. It was carved by Jean-Luc Severac in commemoration of the 140 Cathars who were buried alive there in 1210 as a result of persecution by the Church of Rome. Elizabeth Van Buren writes about the Cathars in her book, THE SIGN OF THE DOVE:

“These people called themselves the Pure. They said that they were waiting the return of the Paraclete, the reign of the Holy Spirit. They were known as Cathari or Albigensians and were respected by the local clergy and the nobility, although they were considered unrealistic in their ideals.”‘

And when their numbers grew, and Catholic villagers started agreeing with their principles and apostolic living, the pope [Innocent III] had them brutally slaughtered.

The first image above depicts Cathars being forced to leave with nothing, not even fully clothed. The year was 1209. Word had reached many villages about the massive massacre in Béziers, so surrendered without a fight. The villagers in Carcassonne were trying to hold out in their heavily fortified castle (still gloriously standing today), yet their water supply was cut off from them, and they had to give in to the Inquisition.

The dove, in the second image, is a symbol of the Cathars, which is translated from Greek as ‘pure,’ which is how they lived their lives.

Maybe it’s the dove that had me thinking about Noah, and other Biblical stories about the Dove. I thought about the film Noah with Russell Crowe. I’ve only seen it once, in 2014, and thought it was brilliantly created by Darren Aronofsky who directed and co-wrote. Some powerful lines in the film speak to our issues today, like climate breakdown, viruses, and violence. Noah assures his grandfather that the end will come by water (purification), the grandfather was sure it was fire. Round II…fire. Grandfather got it right, Gaia is burning.

[Noah can be see on Netflix until August 31st.]

Other notable and timely declarations from Noah and his grandfather:

‘Men are going to be punished for what they’ve done to the world.’

‘The wickedness is in all of us.’

I think I know why I was pulled to revisit the film again. 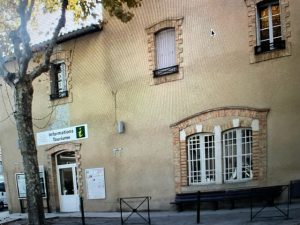 First day back out after a 10-day isolation. Hot. Very hot. Another heat wave is descending, like the fourth this summer. Everyone is talking about how unusual it is to be this hot for this long. The two women there were so kind and helpful, we communicated!, and they gave me some ideas since I hike everywhere I explore. I think I can make it to a sacred space that I visited once before, St. Salvayre. 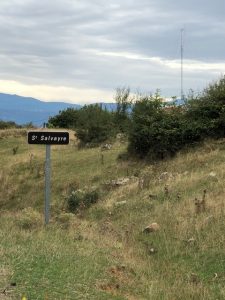 Powerful, magical energy in this tiny hamlet with three houses and two farms. I was there a long while. The history is ancient with a Roman-type standing stone not far from the entry in this ancient church, again, party of the sacred geometry in the area. The church was built around the stone, still protruding from the earth. I hope to be there again in the next couple of days.

Not tons of energy yet out and about, and with the heat, pas bon. 98 today. Had to stock up on my water supplies, too. I drank a ton of liquids over the last 10 days; very little appetite.

No one is masking.

Infections are way up all over France. The woman who owns my building may be finally able to leave the hospital tomorrow after 11/12 days. Her sister and daughter are here now to assist her. She had to be put on a respirator at one point, and she has underlying medical conditions, too. My hope is that she’ll start masking…and her family. Long covid is causing major health problems now. In Italy, one of the heaviest hit areas for Covid back in 2020, now reporting massive numbers of diabetes along with heavy reports of neurological ailments. And…Monkey Pox. Those numbers are going up, too.

We’re going to need a lot of doves.