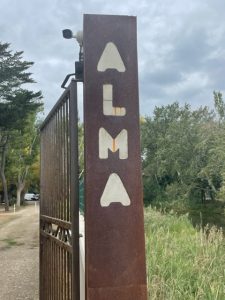 Gratitude is a quality similar to electricity: it must be produced and discharged and used in order to exist at all. -William Faulkner

My great-grandma’s name, Alma. Alma Evalo Latta. Who gave me a mother’s love when mine was incapable of giving.

The grand parent is able to relinquish center stage and to stand on the sidelines, and thus be in solidarity with those who need their support. Children can feel secure in the presence of their grandparents because, while their parents are still rushing to find their way through life’s journey, grandpa and grandma have hopefully become spacious. They can contain problems, inconsistencies, inconveniences, and contradictions—after a lifetime of practicing and learning.

Grand parents can trust life because they have seen more of it than younger people have, and they can trust death because they are closer to it. Something has told them along the way that who they are now is never the final stage, and this one isn’t either. We need to be close enough to our own death to see it coming and to recognize that death and life are united in an eternal embrace, and one is not the end of the other. Death is what it is. I am a grand father when I am ready to let go. To the grand mother, death is no longer an enemy, but as Saint Francis called it, a “welcome sister.” -Father Richard Rohr

I chose this place to stay in Collioure, on the Mediterranean, because of my grandma who I miss everyday and talk with in my prayers and meditations. When we arrived after a day of back road DRIVING IN FRANCE (WHAT?!), 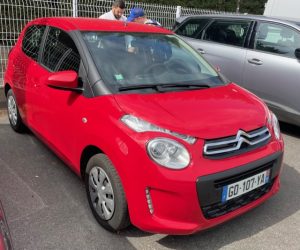 [A Citroën in France. Bien sûr.]

it was not what was advertised, not so much structures on a beach connected by private platforms, 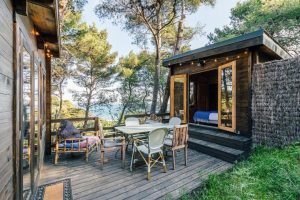 but na extremely dirty once white tent on rocks with no windows and a bathroom quite far away. We didn’t have what we needed for a cold night of rain and thunderstorms…in a tent. <sigh> Alma is camping, not ‘glamping.’ So we left and went searching for a new place, on a Saturday. Pas bon. Looked at a Templar hotel, with a window opened to access pigeons in a dark, damp, alley. No merci. Finally, we landed, Grand Hotel Du Golfe, on the Gulf of Lion. Tres bon. 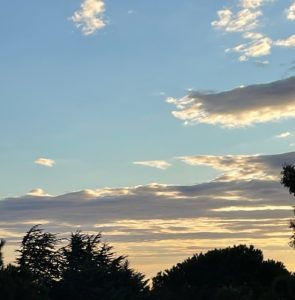 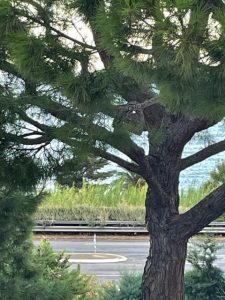 The colours of Collioure, a small village, home to about 2,800 people, in the south of France. It’s just over 2 hours to Barcelona. 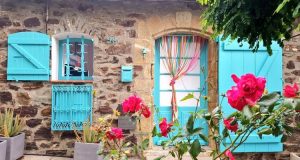 Matisse, Soutine, Gauguin, Picasso, Miró. All artists who made pilgrimage to Colloure for the colours… 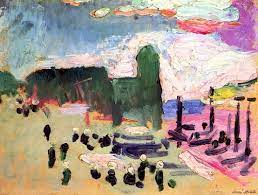 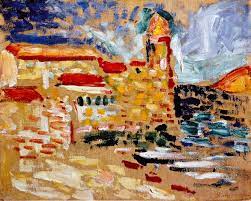 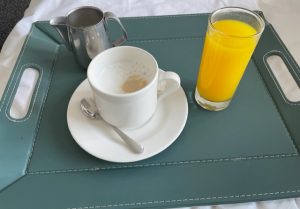 What did I do today? I explored Southern France with two of my most favorite people on the planet, Annie Glenn and Michael Gillette. Radical Grace. Thanks be to you, dear Gaia. (I miss you William Henry.)

Exploring the ruins of Puilaurens and Montsegur, traveling the back ancient roads of Landguedoc/Occitanie. ღ

Saint Thérèse of Lisieux (1873–1897) called a simple, childlike path her “little way.” It is a spirituality of imperfection. In a letter to priest Adolphe Roulland (1870–1934), she writes: “Perfection seems simple to me, I see it is sufficient to recognize one’s nothingness and to abandon oneself as a child into G A I A ‘s  arms.”  Perfection is, in fact, our ability to include, forgive, and accept our imperfection. As I’ve often said, we grow spiritually much more by doing it wrong than by doing it right. That might just be the central lesson of how spiritual growth happens, yet nothing in us wants to believe it.

If there is such a thing as human perfection, it seems to emerge precisely from how we handle the imperfection that is everywhere, especially in ourselves. A “perfect” person ends up being one who can consciously forgive and include imperfection rather than the ones who think they are totally above and beyond imperfection. It becomes rather obvious once we say it out loud.

Our greatest gift to give. jai 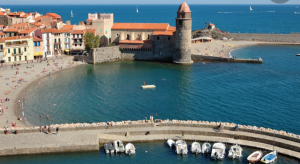