Think Emily in Paris, but without the clothes. And youth. When an almost two decade dream becomes a reality, it kinda feels like a simulation, an alternate reality I created in my mind because I thought about it so much.

July 3rd and 4th were travel days. To celebrate the 4th of July, I left the country. And on July 4th, another senseless gun massacre at     a     parade. Nothing will be done because the United States values guns more than life. Too many people own too many guns in the U.S., high powered military weapons. And the killing continues. I know I don’t want to go back to the cesspool that it has become, an experiment that is dissolving because of greed, power, dark money, systemic patriarchy and leaders who should not be leaders. So many brilliant, young people and minds in the United States, and this is who we get. So, yeah, I don’t want to go back. Yet, without a residency visa, I can only stay three months. I met a woman from England at the marche [market] today who has lived here five years. She shared her visa experience was one of ease and permission. Yet her driver’s license experience? Ooh la la.

It took two months to compile the needed paperwork and requirements for the visa application. I flew to Los Angeles in March to meet with the visa consulate in person. I was in their office for 4.5 hours. A week later I was denied. Their reason is that my reason for wanting to research and write in the ancient region of Languedoc wasn’t a good enough one. I will try again. Until then, I am here. Researching ruins, studying the Cathars and connecting with Mary Magdalene.

After two years of COVID French Duolingo, I’m not ready. At all. People speak French here. A lot of French. Only French. :) Phrases and words, reading and comprehension coming along, yet speaking? Pas bon. (Not good.) But, you know, Emily didn’t speak French when she took the job at that AD AGENCY in Paris. I’ll learn. I wish I had a mind for language. I took Russian in college…and a little French. Tons of Spanish in high school, and still, to this day, my first foreign language default is Spanish, which worked nicely on the Camino in Spain. Not so much in France.

Bonus. Massive bonus. I happened to choose to be here during the Tour de France. Big Fan. Yet I had no idea the tour was actually going through Limoux. What?! Yep. I think stage 16, after the rest day, on July 19th. From Carcassonne (about 30 minutes north from Limoux) to Foix as the riders approach the Pyrenees. So passing through! I’ll be there! I brought my polka dot pin from the 2004 Tour when I was on the Champs-Elysees and watched Lance win his 6th in his gold helmet. Indelible. Thank you, Theodore.

I slept 11 hours after I arrived. From San Diego to Salt Lake City to Paris to Toulouse. Delayed in Paris, but my bags made it! Even with all the flying warnings and chaos stories. Whew. I opted to pay more for a taxi instead of trying to maneuver the train with a backpack and three large bags. A taxi service I pre-ordered through booking.com (don’t) bailed on me, so I had to search for someone to drive for me. It was an hour and 30 minute drive through fields of sunflowers and grapes for their brilliant Blanquette de Limoux. Jean-Michele, my driver, was so kind. And he played Cat Stevens the entire way. Glad Cedric decided not to stay. Yeah, pretty great. It’s a sign. :)

Nicolette, who owns the flat where I’m staying, is from Scotland, her dad lives in Spain. English! She’s helping me acclimate in a language I understand. So grateful. She has put so much thought and care into her flats at La Maison 22. Her French country decor and comfort are simply perfect. My place has a small balcony and overlooks the river Aude, where I can listen to the bells from the Church of Saint-Martin, built in the 1100’s. I’ll be back. When I get that visa!

Last evening I took a stroll around the village, many establishments are closed on Mondays. It was a quiet. A young man walked close by to me and said, “Stone. Stone.” I must have looked as perplexed as I felt. And then he made the universal gesture for getting stoned. Although a lovely idea after two days of travel, weed is highly illegal in France. So, thanks, really, but no. And a smile.

Today was organizing and unpacking, streaming the Tour, French Press coffee on the balcony, happy birds, frantic ducks, and a happy heart being so far removed from the United States both physically and mentally.

Nicolette emailed me about the marche, the first of the season, every Tuesday evening through July and August in the village. Happy people, music, and dining al fresco on the historic centre around the Place de la Republique.

Deep sorrow for what is happening in, to, the United States. So much promise. So much devastation and harm. For now, my focus is on possibility, potential, and purpose as I ease into life’s chapter 4. It took a lot to get here. To be here. It isn’t a simulation, its providence, and grace.

Thanks be to Gaia. And my ancestors, particularly, my great-grandma, Alma Evalo Latta (who gave me a mother’s love), my brother, Darrell Lee Ohlau, and my dad, Robert Dale Ohlau. Mitakuye Oyasin. 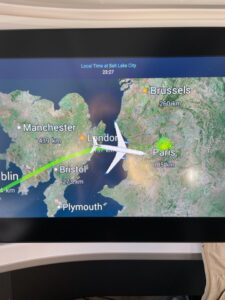 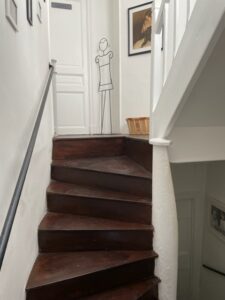 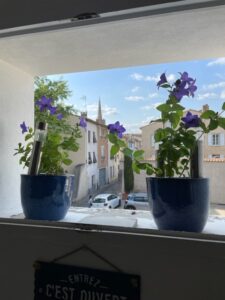 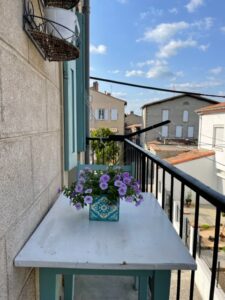 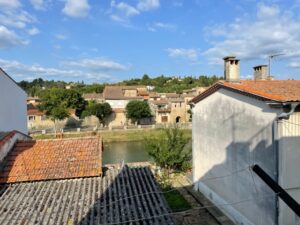 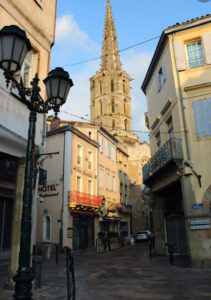 Languedoc is a centre of the distinctive civilization of the south of France. Its name is derived from the traditional language of southern France, in which the word oc means “yes,” in contrast to oïl, or oui, in northern French. From the 13th century the name applied to the entire area in which the Languedoc, or Occitan, language was spoken and came to apply specifically to the territory of the feudal county of Toulouse.

From 121 BC the territory that constituted Languedoc was part of the Roman province of Gallia Narbonensis, which connected Italy to Spain, and was strongly influenced by Roman culture. With the breakdown of the Roman Empire, the region was controlled by the Visigoths in the 5th century and was partially conquered by the Franks in the 6th century.

From the mid-12th century, the Cathari, a Manichaean sect, won wide support from the people and the nobles of Languedoc; the Cathari were sometimes called Albigensesbecause of their strength around the town of Albi. They were branded as heretics by the Roman Catholic church, and Pope Innocent III preached a crusade against them, precipitating an invasion of Languedoc by a northern French army in 1209. The ensuing wars, which lasted until the mid-13th century, ended the political independence of Languedoc. [britannica.com]