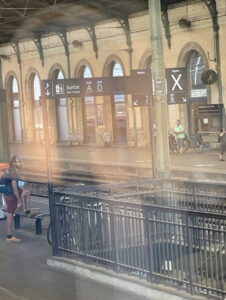 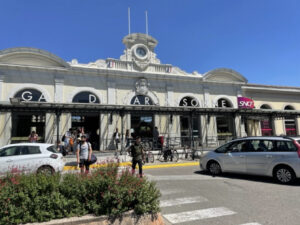 First, it was the bus from Limoux to Carcassonne. 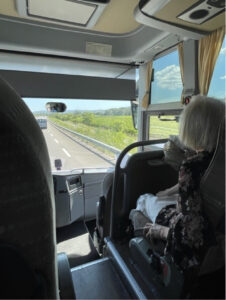 It was a day of learning and confusion. 🙃

And angels on my path when I needed help the most, like Suni from Pakistan who gave me a full tutorial on train travel in France, helped me download some European train apps before he caught his train. He has lived in Germany, speaks fluent German, extremely fluid English, and is learning French. He is trying to secure a visa so he can work in France and attend school. He told me, “I can’t go back to Pakistan. There is no future for me there.” Meeting people from different cultures, speaking different languages, observing their behaviors and kindnesses truly fills and renews my spirit. Another person I spoke to along my different stops and exchanges said to me when I told him I was from the United States, “It’s very dangerous there.” The whole world is watching. A co-passenger on another train as I was making my way slowly to Grenoble explained one of the announcements over the intercom system for me that passengers were being warned about a pick-pocket on the train. I told him, “I wish we had more pick-pockets in our country, instead of guns. He paused and said, “It makes us very worried in Europe.” He’s from Italy and lives in France. His name is Claudio. He explained that we are citizens of the world and it doesn’t matter where we’re from, it effects all of us. My heart. Indeed. So beautifully expressed. 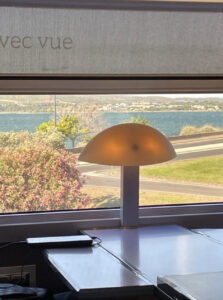 The train moving through Sète, Languedoc, France, on the Mediterranean coast. Established 1,000 years ago, it’s a UNESCO world heritage site. It’s on my list to visit.

12 hours later I made it to Grenoble. Trees line the downtown with a very hip, young vibe. Apparently it’s a university town with over 60,000 students here. The population is around 165,000. A very different feeling from my beloved Languedoc region. It’s about an hour east of Lyon. Beautiful area—mountain ranges and massive history. Can’t wait to explore. It was dark when I arrived. Photos tomorrow! 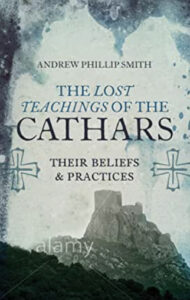 Reading on the trains today, I had to pause and reel in the reminded awareness how awful, awful…humans have treated each other over the centuries and continue still. In this instance, crusades and inquisitions, torture and burnings at the stake. This journey today on a micro level reminded me how kind and compassionate and caring the human species can be. We’re one of 8,000,000 species on the planet. And we’re destroying it…and each other. And it never stops. We just find different ways to mutilate and hate. For millennia.

Again, the question simmers: Are humans, by nature, good or evil? Or, does society corrupt? Rhetorical. Been thinking about it a lot lately, though. Perhaps it’s why the Cathar landed on duality, to help explain it, and understand.

Rex Mundi. More later on what was considered Cathar heresy.