Today marks the 77th anniversary of the liberation of the Nazi death camp Auschwitz on Jan. 27, 1945. 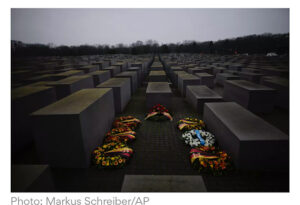 Wreaths were placed in Berlin today at the Memorial to the Murdered Jews of Europe.

President Biden said: “Today, we attempt to fill a piercing silence from our past — to give voice to the six million Jews who were systematically and ruthlessly murdered by the Nazis and their collaborators.” [AXIOS]

By VANESSA GERA and SAMUEL PETREQUIN

WARSAW, Poland (AP) — Survivors recalled their agony to a world they fear is forgetting, Israel’s parliamentary speaker wept in the German parliament and politicians warned of a resurgence of antisemitism on Thursday’s International Holocaust Remembrance Day.

The day falls on the anniversary of the liberation by Soviet troops of Auschwitz-Birkenau, the most notorious of the death camps where Nazi Germany carried out its Final Solution seeking to murder the Jewish people of Europe.

At the memorial site in Poland, which was subjected to a brutal German occupation during World War II, a small number of survivors gathered in an auditorium. Attendance at the yearly event was sharply curtailed amid Europe’s coronavirus surge. Others joined online.

Nazi German forces killed 1.1 million people at Auschwitz, most of them Jews, but also Poles, Roma and others.

Mickey Levy, Speaker of the Knesset, reacts during the commemoration of the “Day of Remembrance of the Victims of National Socialism” in the German Bundestag, Berlin, Thursday, Jan.27, 2022. (Kay Nietfeld/dpa via AP)

Halina Birenbaum, a 92-year-old Polish-born poet who lives in Israel, recalled her suffering remotely. She was 10 when the Germans invaded and occupied Poland in September 1939, and was 13 when she was taken to Auschwitz-Birkenau after being led out of the gas chamber of the Majdanek camp thanks to a malfunction.

“I saw masses of the powerful but arrogant army of Nazi Germany as they marched cruelly, victoriously, into the devastated and burning streets of Warsaw,” she recalled.

“The countless experiences of infinite suffering on the brink of death are already a distant, unimaginable story for new generations,” she said.

Commemorations everywhere took place amid a rise of antisemitism that gained traction during lockdowns as the coronavirus pandemic has exacerbated hatred online. 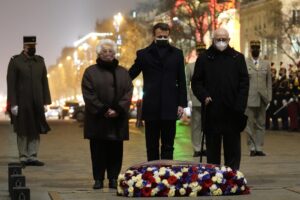 Official recording from the LIVE stream of the commemoration event for the 77th Anniversary of the Liberation of Auschwitz (January 27, 2022, 16 CET).

‘Holocaust Remembrance Day was designated by United Nations General Assembly resolution 60/7 on 1 November 2005. The resolution came after a special session was held earlier that year on 24 January to mark the 60th anniversary of the liberation of the Nazi concentration camps and the end of the Holocaust.’ [wikipedia]

On this day of painful remembrance,

Please bless the souls of those who died in the Holocaust.

Bless the souls of those who were targeted,

and bless the souls of those who helped them.

Heal the hearts of those who carry the scars of evil,

and awaken our hearts and strengthen us

for the work that we must do today.

to create a world in which evil such as that

will occur no more.

In the words of Elie Weisel, a survivor of Holocaust who dedicated his life to our deeper understanding of its significance,

Today, we must do a lot with them. Today may we all bear witness. “The official podcast of the Auschwitz Memorial. The history of Auschwitz is exceptionally complex. It combined two functions: a concentration camp and an extermination center. Nazi Germany persecuted various groups of people there, and the camp complex continually expanded and transformed itself. In the podcast “On Auschwitz,” we discuss the details of the history of the camp as well as our contemporary memory of this important and special place.” 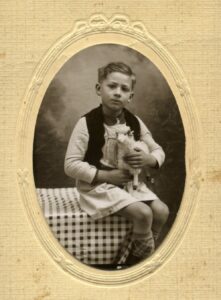 29 January 1936 | A French Jewish boy, Michel Ejzenberg, was born in Paris. He arrived at #Auschwitz on 26 August 1942 in a transport of 1,000 Jews deported from Drancy. He was murdered in a gas chamber after selection.

Please follow them on social media. Everyday, they post a photo on the birthday of a prisoner from the concentration camps during WWII. On Twitter: @AuschwitzMuseum

We honor their memory, and remember their promise.