Life takes pride in not appearing uncomplicated. If it relied on simplicity, it probably would not succeed in moving us to do all those things that we are not easily moved to do.

“The Way Things Are…”

That’s how culture perpetuates injustice and indignity. Because that’s just the way things are around here.

But the status quo isn’t permanent. The world doesn’t stay the way it was. It changes.

And it’s been changing faster than ever.

It doesn’t change because the status quo sub-committee had a meeting and decided to change it.

It changes when someone decides that the way things are around here needs to change, and simply and bravely begins to do something differently.

And then someone else follows along.

I fear that the elevation of Dr. King to the pantheon of great Americans who have national birthday celebrations has come at a subtle cost. These days almost no public official would dare speak ill of Dr. King. However I worry that this universal acclaim has deadened the radicalism of Dr. King’s message. And by radicalism, I mean that what he espoused was far outside what was then the mainstream. It still is.

We must remember that he was a deeply contentious person at the time of his death. Dr. King would not, could not, suppress the moral clarity with which he saw the world. His messages about racial prejudice and social justice were not welcome in most corridors of power. He was a danger to the status quo and many who benefited from it. He not only preached powerfully about the necessity for racial healing and integration. He also issued stirring rhetoric from his pulpit on the need for economic fairness across racial lines. And he was a fierce critic of the Vietnam War.

So today, please don’t revere Dr. King the American saint. Please engage with Dr. King as the unique vessel for a message America was long overdue to hear. 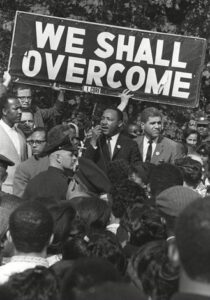 Those words should ring like clarion calls to all of us today. Our task is not merely to celebrate the ideals of Martin Luther King Jr., but to commit ourselves to their realization. And that means much more than just tweeting a quote, or making an instagram post. It means developing what Dr. King described as “tough minds and tender hearts.” It means committing to routing out not only systems of injustice in the world, but also the hatred in our own hearts. Dr. King said that a basic tenet of non-violent philosophy is that “self-purification must precede political action.” In his words, we need both “a quantitative change in our circumstances and a qualitative shift in our souls.”

Dr. King was the Reverend Dr. Martin Luther King Jr., remember, a Baptist preacher whose political vision was rooted in his understanding of the gospel of Christ. “It is time,” he said, “to inject a new dimension of love into the veins of human civilization.” That love – that new love – was a social love, a love that would heal not only personal but also political and social relationships as well. He found inspiration for that possibility in the work of Mahatma Gandhi, traveling to India to study the principles of non-violence and bringing them back for application to the struggle for Civil Rights in the United States in the 1960’s. 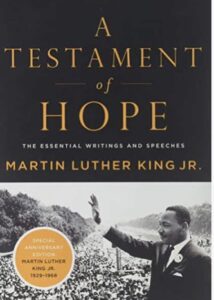 ‘…the ultimate goal (was) the establishment of the beloved community.” Such a notion was not a religious platitude; it was a political strategy.

For a full look at Dr. King’s writings and speeches, I highly recommend A Testament of Hope.’ -Marianne

The longer I live, the more urgent it seems to me to endure and transcribe the whole dictation of existence up to its end, for it might just be the case that only the very last sentence contains that small and possibly inconspicuous word through which everything we had struggled to learn and everything we had failed to understand will be transformed suddenly into magnificent sense.

This is where we are, not to regulate and protect, but defend, on our own, to stay alive. -dayle Rabbi Charlie Cytron-Walker — who was among the four hostages at Congregation Beth Israel in Colleyville, Texas, on Saturday — said his congregation has taken security training over the years from Colleyville police, FBI, Anti-Defamation League and Secure Community Network.

The word religion, at its roots, means re, “again,” and ligios, “connection,” like ligaments. Religion is meant to offer us support to connect again what has been separated. Apparently we need constant reminders to continually reconnect with the fullness of life, the whole, the holy. What we’ve created is more like disligion: disconnection from people and species unlike us. When religion loses its purpose and colludes with the forces of separation instead, it becomes irrelevant and even irreverent. . . .

Loorz seeks to encourage people towards deeper love by encountering the Holy outdoors:

The new story is emerging, and I cannot pretend to know all the layers. Yet one aspect that seems essential relates to the worldview of belonging—a way of being human that acts as if we belong to a community larger than our own family, race, class, and culture, and larger even than our own species. The apocalyptic unveiling happening in our world right now makes it difficult even for those who have been sheltered in privilege to look away from the reality, both tragic and beautiful, that we are all deeply interconnected. Humans, trees, oceans, deer, viruses, bees. God.

Many people, whether they go to church regularly or avoid it, feel closest to God while they are in nature. Even a simple gaze at a full moon can be a spiritual experience if you are mindful enough. And a glorious sunset can summon hallelujahs from deep in your soul. Humans are made to engage in life-affirming conversation with the whole, holy web of life. . . .

Mystical experience in nature—those moments when you sense your interconnection with all things—are more than just interesting encounters. They are invitations into relationship. Beyond caring for creation or stewarding Earth’s “resources,” it is entering into an actual relationship with particular places and beings of the living world that can provide an embodied, rooted foundation for transformation. The global shift necessary to actually survive the crises we’ve created depends on a deep inner change. 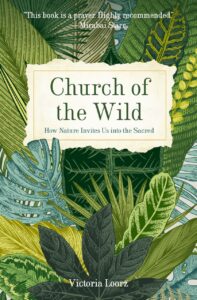 The Wild Church Network is here to encourage and support people who are starting Wild Churches.  The Church of the Wild book offers inspiration for those who feel the call from Spirit and Earth herself to create a spiritual community that reconnects us to the rest of the alive and sacred world.

“This book will be of great use to all who feel a little broken by the world right now—those of a Christian heritage especially, but really everyone yearning to reconnect with something larger. I think the wisest course of action would be to slip it into a knapsack and remove yourself outdoors to read it.”

—Bill McKibben, author of Falter, Eaarth, and The End of Nature

The Wild Church Network is here to encourage and support people who are starting Wild Churches.  The Church of the Wild book offers inspiration for those who feel the call from Spirit and Earth herself to create a spiritual community that reconnects us to the rest of the alive and sacred world.

“This book will be of great use to all who feel a little broken by the world right now—those of a Christian heritage especially, but really everyone yearning to reconnect with something larger. I think the wisest course of action would be to slip it into a knapsack and remove yourself outdoors to read it.”

—Bill McKibben, author of Falter, Eaarth, and The End of Nature

A Movement is Emerging…

From isolation to connection.

From detachment to immersion.

From dualism to interBeing.

Popping up all over the land, like wild mushrooms after a spring rain,

Wild Church communities are responding to a call from deep within

to change the way we relate to the natural world, moving

“from a collection of objects, to a communion of subjects”