Six days a week for almost three decades, the pioneering first lady explored what it’s like to be an American

When humorist Will Rogers died in a plane crash in Alaska in 1935, millions around the world mourned his passing. For V. V. McNitt, Rogers’s death was a practical as well as a personal loss. McNitt managed the McNaught Syndicate, which distributed Rogers’s highly popular column to newspapers across America. What would McNitt do now without his star writer? 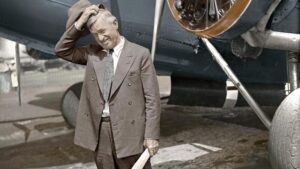 Will Rogers, posing circa 1928 in front of a Curtiss Condor U.S. Mail aircraft, penned an immensely popular newspaper column until his death in a plane crash in Alaska.
—Alamy Stock Photo

He thought he’d found a replacement with Alice Roosevelt Longworth, the sharp-tongued daughter of the late President Theodore Roosevelt. In short order, her new feature, “What Alice Thinks,” was in 75 newspapers, a seemingly auspicious beginning.

Then a rival company, United Feature Syndicate, recruited First Lady Eleanor Roosevelt to compete with her cousin. Longworth’s column quickly fizzled, and ER would go on to write her column, “My Day,” six days a week for nearly 30 years.

“My Day” far outlasted Eleanor’s time in the White House, ending only with her death in 1962. The sheer frequency of “My Day,” which ran with very few interruptions during its decades of publication, also extended ER’s influence immeasurably. She would become an almost daily presence in the lives of her audience in a manner that anticipated the social-media age.

When Roosevelt’s name was floated as a possible vice-presidential running mate for President Harry Truman in 1948, she demurred. “As an elected or appointed official,” biographer David Michaelis notes, “she would have felt that any office was a demotion or a constraint. Now free to speak her mind, she was uniquely influential because her audience was listening. Through her column she could give her opinion on matters six days a week. Firmly, unscoldingly she was there each day to remind people that a powerful America was supposed to be above racism, had a responsibility to find ways to give basic decencies to the poor.”

If FDR exemplified the heroic presidency as a champion of the New Deal and wartime leader on a global stage, then his wife tended to offer an alternative vision. Her columns suggested that presidents and first ladies, for all the trappings of high office, still lead much of their lives in the lowercase. They get tired. They get sick. They sometimes don’t want to be bothered.

Time magazine, commenting on “My Day,” lauded “Mrs. Roosevelt’s ability to make the nation’s most exalted household seem like anybody else’s.”

Roosevelt maintained a high profile early in her widowhood as an official at the fledgling United Nations. She later worked as a volunteer supporter of the U.N. and in many civic and Democratic party causes.

Beyond their quaint domestic observations, her “My Day” columns could also be boldly political, especially after she returned to life as a private citizen and felt at even greater liberty to speak her mind.

Many of Roosevelt’s “My Day” columns can be read online, and they’ve also been curated in several books, such as editor David Emblidge’s My Day: The Best of Eleanor Roosevelt’s Acclaimed Newspaper Columns, 1936–1962. 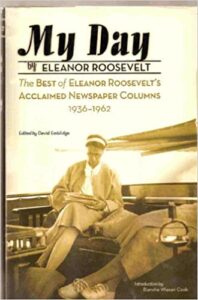 They’re written with a simplicity that ER’s critics found banal and her fans found appealing. Stella Hershan, who fled Nazi-occupied Austria and arrived in the United States penniless, learned about her new country by reading “My Day.”

“Her writing was so simple, even I could understand it. From her,” Hershan said of Eleanor Roosevelt, “I learned about America.”

Of one thing I am sure: Young or old, in order to be useful we must stand for the things we feel are right, and we must work for those things wherever we find ourselves. It does very little good to believe something unless you tell your friends and associates of your beliefs. Those who fight down in the marketplace are bound to be confused every now and then. Sometimes they will be deceived, and sometimes the dirt that they touch will cling to them. But if their hearts are pure and their purposes are unswerving, they will win through to the end of their mission on earth, untarnished.