Written in response to SpaceX/Tesla founder Elon Musks comparison to Hilter and Canadian Prime Minister Justin Trudeau on social media yesterday. [The meme will not be posted here. -dayle]

From from author and former CBS news anchor Dan Rather:

“To see this face [Hitler] staring back at us, with a message like this, is absolutely beyond the pale of any civilized communication. I think of the millions dead. I think of a world destroyed. I shake with anger. The pit of my stomach is sick. I am deeply saddened.”

From his blog, Steady:

“On the individual level this raises serious concerns about Musk, whose public pronouncements have become increasingly strident and aligned with fringe political actors. Meanwhile, his company Tesla is being sued in California for racism.

The opprobrium Musk is getting is well warranted. His behavior raises many questions. Will it hurt the popularity of his Tesla cars? What will it mean for his SpaceX company’s contracts with NASA? Or, will anyone really care? Is this all just normal now, within the spectrum of what is considered “acceptable”?

I am confident that the vast majority of Americans and people around the globe find this rhetoric reprehensible. Just because you are a feted centibillionaire (a new word for those in the $100 billion club) doesn’t mean you can get away with this outrageousness. When people rise up and say, “No,” “This is not okay,” “We will not let it stand unchallenged,” the world has no choice but to pay attention. There can be swelling choruses for good. Public pressure can lead to better outcomes.”

Musk eventually deleted the meme later in the day.

“Is this all just normal now, within the spectrum of what is considered ‘acceptable’?”

dayle: Thinking of this in context of seeing a clip of a photographer fall off a six-foot stage in LA while capturing a photo of the Rams quarterback and his wife at a victory celebration. The quarterback saw it and turned his back, not offering to help or ask for assistance.

Considered in larger context, how is the vitriol, hate, anger, and neglect centered in social media affecting our sense of collective compassion and kindness? Is being called out for turning his back the reason the couple is offering to pay the photographer’s medical bills? As documentarian Ken Burns shared in an interview with variety this week about his concerns for the U.S.,

“My whole question to America is where do you want to live?” says Burns. “This is a simple choice between Bedford Falls and Pottersville. Do you wish to be a community in which everyone is bound to each other and enjoys the blessings of liberty and free speech and freedom to assemble and religion? Or do you wish to live in an I’ll-get-mine Pottersville, in which everything is degraded and corrupted.” 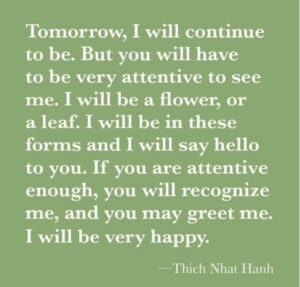 From the Flourish Foundation:

“Only the grace of Spirit can enable us to let go of our fears. True prayer (spiritual dialogue) is fundamental for life in Spirit. It is that grace of conversion that opens up our hearts to realize the humble presence in our lives. Prayer of the heart is unceasing prayer, where Spirit breathes in us and our hearts are turned. This deepening of our lives in the divine life is the path to self-discovery. In and through prayer we discover our true selves, the self that Spirit has created each of us to be. . . .

Life in <Divine Presence> should be a daring adventure of love but often we settle for mediocrity. We follow the daily practice of prayer but we are unwilling or, for various reasons, unable to give ourselves totally…to settle on the plain of mediocrity is to settle for something les…” 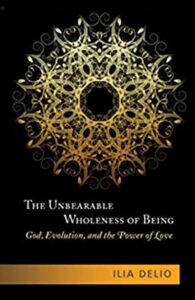