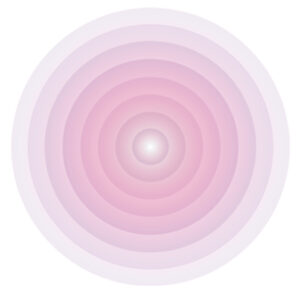 ’60-65% of all the cells in the heart are neural cells, which function in the same way as brain cells.’

A global shift is under way and more people are sensing it involves a deeper connection with their heart. This desire for more heart connection is a growing movement, one that people are drawn to by a nudge from their own intuition or conscience to listen to their heart more and to connect with their inner guidance. -Heart Math

‘Here, as I’m undergoing my second bout of cancer treatment for leukemia, I’ve decided to do a 100-day creativity project beginning on April 1, 2022, and I’m inviting all you beautiful souls to join me.

This is my fourth go-round. To me, the 100-day project is so powerful, both the sense of creative possibility and the organizing principle it affords: your day becomes centered around one small creative act. I also love the element of community, drawing inspiration and a sense of accountability from others.

There are so many shapes such a project can take—from writing a daily childhood memory to collaging, piano playing, or walking in nature. It just needs to feel exciting, a little challenging, but most of all sustainable, so you’re able to keep it up over the course of 100 days.

As someone who feels pulled by the siren call of hyper-productivity, I want to make clear: the 100-day project is not that. The point is to get into a more liberated, playful creative flow state—not to reinforce the pressure of constant striving, or the compulsion to be productive, or the idea that creative activity needs to culminate in some kind of grand masterpiece.

This time around, the 100-day project will be mostly self-directed. For those who want an extra dose of accountability, paid subscribers will have the option of getting regular pep talks from me, along with check-ins and opportunities to have your work featured.

Below you’ll find some frequently asked questions and my answers—all with the caveat that this practice is for you. Make it your own. Let it take you where it will.

In love and creative solidarity, 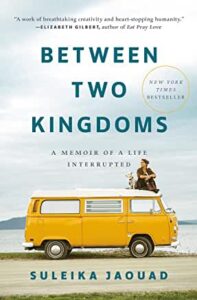 Her book, Lost Between Two Kingdoms, is now available in paperback. Wonderful read and journey. -dayle 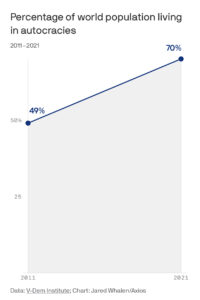 Democracy is good for your health

Here’s a big reason to study the people of Ukraine: The war is showing in real-time the power of democracy, amid growing global clout for dictators.

Why it matters: Free people live better lives, a mountain of data shows. And sometimes it takes an aspiring democracy to remind us why governments of the people are worth fighting for.

Let the graphic above sink in — then share it with people who trivialize democratic erosion. Democracies are literally disappearing.

Of 195 nations on earth, just 34 are liberal democracies — where citizens have rights to free speech, free press, free and fair elections, and other liberties — according to a study by Varieties of Democracy.
Living in a stable democracy leads to a longer and more fulfilling life, the data shows:

Health: If you live in a democracy that’s at least 25 years old, you’re likely to live 14 years longer than people in autocracies, a University of British Columbia study found. Babies in mature democracies are 78% less likely to die in childbirth.
Wealth: Democratization boosts a nation’s wealth 20% over 25 years.
Education: Democratization bumps citizens’ enrollment in secondary education by 70%.

Reality check: After nuclear war, and possibly climate changes, the rise of authoritarians, like Vladimir Putin, and the decline of democracies has the most potential to shape America’s future — more profoundly than the small-ball fights we often get sucked into.

The dictators are winning. A Russian dictator, backed by an authoritarian Chinese leader and enabled by the silence of the Saudis, is killing thousands, seizing land, destroying a nation.

A Freedom House report released in February found that 60 countries had suffered declines in democracy in the previous year.

The bottom line: American critics sometimes dog — and in some cases damage — their democracy. But watching Ukrainians amplifies the preciousness and precariousness of freedom.

[Editor’s note: This article has been corrected to note that people living in democracies older than 25 years are likely to live longer.]

Glory to Ukraine ~ Their struggle, their sacrifice, is ours. -dayle

‘She encourages us to stand up to the forces that destroy, forces she calls “the spirit of evil.”

The warrior in us can rise up, armed with trust and courage, to spread low and make justice and compassion happen. In doing this, a promise is set forth that, some day, all can be well. 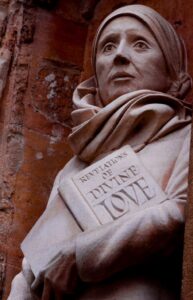 ‘The biggest influence on Julian as an adult were Thomas Aquinas and Meister Eckhart, whether directly or indirectly. Remember that Aquinas, who was condemned by bishops in both Oxford and Paris less than a century before Julian was born, was condemned for his non-dualism (which, again, makes him a photo-feminist). But, and this cannot be emphasized enough, he was canonized a saint in 1323, less than twenty years before she was born. The excitement among the Dominicans in England must have been extreme.

As Aquinas put it, one person can do more evil than all the other species put together.’ -Matthew Fox

Yep. Still. The 21st century is no different. -dayle 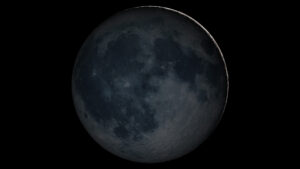 ‘This is an extremely potent New Moon, full of fire, opportunity, and inspiration for starting something new. It marks the beginning of a new cycle and should be honored as the set up and foundation for new commitments, goals, confidence, clarity, change and attitude. We are called to action, to be better, to be more conscious and aligned with spirit. It’s a great time to revisit goals and intentions and either reset and confirm them as they are, or refine and improve them if they feel too limited.

A re-evaluation of your relationships especially your relationship to yourself and to spirit is also supported at this time. Are you doing the work? Are you committed to having a good life? Are you taking responsibility for it?  Are you ready to embrace the power that awaits you and change all aspects of your story that point to disempowerment or being wronged in some way? This is a very good time to step into power and to do so takes being proactive and not reactive.

You cannot be ambivalent or in blame of others if you wish to be proactive and take advantage of what this time has to offer. Step into the grand adventure of life and receive the gifts of spirit that are available to those that do. Happy Spring. Happy planting of seeds, dreams and wishes.’ ☆

by Dan Rather, author and journalist

What I find so inspiring about this article and the larger No Mow May movement is its recognition that we humans are foolhardy to try to control nature — that in our homogenization of our landscapes, our search for tidiness and uniformity, we not only miss out on the beautiful wildness of Earth’s diversity, but we also do real damage to its function.

At Steady, we are always on the lookout for different kinds of news stories that inspire, provoke thought, and, yes, induce some hope and steadiness.

We came across just such an article recently in The New York Times. It was written by Anne Readel, who is described as “a photographer, writer, biologist and lawyer.” It’s quite the list of credentials and a reminder that many of us wear multiple professional and personal hats.

During an era of momentous events, this story could be considered “small” or “quaint,” but that scale of size is part of what makes it so powerful. I would argue that in a world that often seems out of balance, we can build progress from small individual actions that are transformative in their collective impact.

The article is titled, “In Wisconsin: Stowing Mowers, Pleasing Bees,” and it asks in its subtitle a question that pretty much explains its central idea: “Can the No Mow May movement help transform the traditional American lawn — a manicured carpet of grass — into something more ecologically beneficial?

‘Appleton became the first city in the United States to adopt No Mow May, with 435 homes registering to take part. For the last few years, Appleton has spearheaded the movement to save the bee by asking community members to leave their lawns alone during May.’

Lastly, on this final day of March 2022, sharing writer Alexandra Stoddard’s words of contemplation for our ‘next’ as democracies weaken, devastating wars continue, the ubiquitous plague waves in and out, and global corruption, i.e., greed, power, and patriarchy, corrodes even the simplest of lives.

When do you feel you are most in touch with your spirit, the core of your being? Where are you? What are you doing? Who are you with? Who would you want to be with? How does this make you feel?

“We were all indoctrinated into a disenchanted world, and we’ve sacrificed a lot in order to live here. The world isn’t better off for having forfeited its tenderness. The meanness and cynicism of our age, the reflexive sarcasm that passes for intelligent reflection, the suspicion and judgment of everyone and everything – such are toxic by-products of a disenchanted worldview.

Many of us went off that wheel of suffering. We don’t want to accept that what is is what has to be. We want to pierce the veil of illusion that separates us from a world of infinite possibility. We want another kind of life for ourselves and for the world. We are considering that there might be another way – a door to miraculous realms simply waiting to be opened. Today I consider that there might be another way.”

“What you don’t surrender, the world strips away.” -Bruce