The village people…nope, he ruined that phrase, too…the townspeople, when they meet in the in the little place  [pronounced ‘ploss’], or square, down below without devices or agenda, are doing way more than nothing, they are doing everything. They c o m m u n i c a t e face-to-face with deep compassion and care for one another, and their tribe. They laugh, they dialogue…sometimes with incredible passion…sometimes silence. And it goes on for hours. They sit under the trees with their cool, cross natural ventilations and circulation, living with the heat not against.

And I thought of them when I read an email from one of my favorite beings on the planet right now, Baratunde Thurston, a writer and cultural critic. He contributes to PUCK. I learned of him watching Brian William’s ’11th Hour’ where he appeared a number of times with clarity and perspective, which, to me, was always right on. He wrote so beautifully from a place of anguish after witnessing the violent slap on the Oscar stage.

I was reminded of the French townspeople here in Limoux when he writes about his travels these summer months in Europe, particularly in Southern France/Spain when he refers to the blistering heat and the climate breakdown. I had some other things to share with you today, yet, I find his writing so profound and important, as well as in alignment with my own thoughts and feelings right now, I decided to share his email, as well as an event he has planned for NYC in September, free for those who join virtually. Sending him a virtual {hug} for that; thank you, Baratunde. 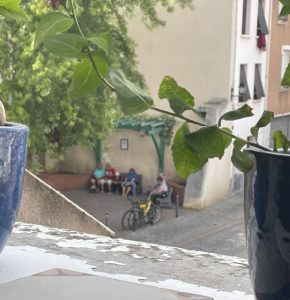 And this is Baratunde’s information about his NYC event next month. And for those of us who can only attend virtually, there is no cost.

This September 21-24, I’ll be hosting Unfinished Live in NYC. This is an immersive live and digital event that, like me, exists at the intersection of technology, art, ideas, and impact. If you don’t think the future should be a foregone conclusion decided by a handful of tech companies hoarding all the things, consider joining.

I saw this synopsis from TMZ today posted after Bill Maher’s HBO show last night. I’ve been feeling this while in France. That is, no online shopping. Everything, every consumption, is purchased locally. And very little processed food. Haven’t seen one Amazon truck or van, even though I understand they do deliver to the area. The point is, the U.S. is catastrophic in its collective energy use, fossil fuel pollution, and junk food, especially in comparison to other countries. 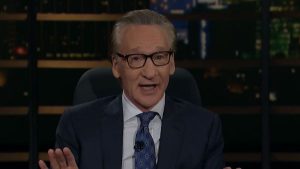 “Bill Maher has a warning … online shopping is taking a not-so-hidden toll on America … and he makes a case that going OG shopping is better for your head and the planet.

The “Real Time” host went scorched earth on people who like to order 9 pairs of pants to find the one that fits just right … only to return the other 8. Those boxes go somewhere … yep, landfills, oceans … not good.

The visual tells the story … buy a small item, it comes in a big box. Buy 3 items … you get 3 big boxes. When you add it up, it’s kind of an environmental disaster.

And, then there’s the human toll … Americans don’t leave their homes like they used to because it’s easier to push a button than to start a car and drive to a mall. Thing is … Americans have become way more isolated, and it’s taking a mental toll, because we are social creatures who increasingly have stopped socializing.”

So much we can do in our micro and macro behaviors; to be cognizant of our choices, and how those choices have consequences for our planet, for Gaia.

Joe, we need an edict.