‘…and practice being alive.’

It all begins with knowing
nothing lasts forever,
so you might as well start packing now.

In the meantime,
practice being alive.

And,
again,
there will be a day,
— a decade —
where you won’t
fit in with your body
even though you’re in
the only body you’re in.

You need to control
your habit of forgetting
to breathe.

Remember when you were younger
and you practiced kissing on your arm?
You were on to something then.
Sometimes harm knows its own healing
Comfort knows its own intelligence.
Kindness too.
It needs no reason.

There is a you
telling you another story of you.
Listen to her.

Where do you feel
anxiety in your body?
The chest? The fist? The dream before waking?
The head that feels like it’s at the top of the swing
or the clutch of gut like falling
& falling & falling and falling
It knows something: you’re dying.
Try to stay alive.

For now, touch yourself.
I’m serious.

Touch your
self.
Take your hand
and place your hand
some place
upon your body.
And listen
to the community of madness
that
you are.
You are
such an
interesting conversation.

‘In truth, the purpose of any relationship is that love itself be served, in the lives of all concerned.’ -Marianne Williamson

The generous heart does not collapse into the easy things, but rises up in adversity. – Mirabai Starr [Glosa a lo Divino, John of the Cross]

‘The deeper that sorrow carves into your being, the more joy you can contain.’ -Kahlil Gibran

Fellowship is a kind of belonging that isn’t based on status, achievement, or gender, but instead is based on a deep belief that everyone matters, everyone is welcome, and everyone is loved, no conditions, no exceptions.
—Brian McLaren 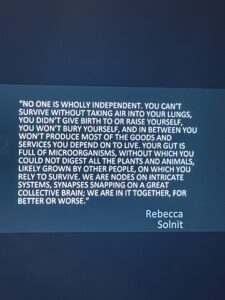 People on all parts of the continuum of gender identity and expression, including those who are gay, bisexual, heterosexual, transgender, cisgender, queer folks, the sexually active, the celibate, and everyone for whom those labels don’t apply. Response: I belong.

People of African descent, of Asian descent, of European descent, of First Nations descent in this land and abroad, and people of mixed and multiple descents and of all the languages spoken here. Response: I belong.

Bodies with all abilities and challenges. Those living with any chronic medical condition, visible or invisible, mental or physical. Response: I belong.

People who identify as activists and those who don’t. Mystics, believers, seekers of all kinds. People of all ages. Those who support you to be here. Response: I belong.

Your emotions: joy, fear, grief, contentment, disappointment, surprise, and all else that flows through you. Response: I belong.

Your families, genetic and otherwise. Those dear to us who have died. Our ancestors and the future ones. The ancestors who lived in this land, in this place, where these buildings are now . . . we honor you through this work that we are undertaking. Response: I belong.

People who feel broken, lost, struggling; who suffer from self-doubt and self-judgment. Response: I belong.

All beings that inhabit this earth: the two-legged, the four-legged, winged and finned, those that walk, fly, and crawl, above the ground and below, in air and water. Response: I belong. “No, Mass Shootings Are Not A Mental Health Issue.”

“So, attention, anti-gun control advocates: You’ve won. This isn’t an article about changing gun laws. I’m not going to fight you about that. But you’re going to start leaving mental health issues out of it. That I will fight you on.

Because claiming that this very specific type of gun violence is the result of mental illness both misses the overall point about gun violence and intentionally demonizes an already marginalized group of people who have nothing to do with this. It’s complete bullshit, and you’re going to knock it the f*#* off.”