The devastation, as many all over the planet are learning, is awful. It will take weeks, months, and years to salvage and re-build in Kentucky from historic flooding there; some will not be able to afford that privilege, having lost everything, and having so little to begin. My source from France has been following Appalshop. I have been connecting with them for years after discovering their work through research I was doing for my inquiry, being instantly connected to their purpose to not only archive and document life in Appalachia, but to teach and connect and serve. They do this lovingly through film and music, radio, video and other media. Their’s is an idea I deeply wanted to see emulated in many communities across the United States. I remember talking to one reporter specifically about it in Sun Valley, Idaho. Today, a note from them… 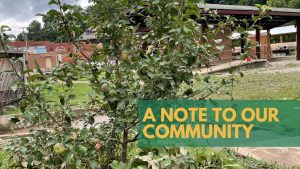 To say the past few days has been overwhelming would be an understatement. We have felt immense grief and sorrow, pain and fear, and a bone-deep dread of discovering the true toll of these floods on our building and our archive. But we have also felt incredible gratitude for all the love and support that has poured out on our behalf and on the behalf of our community.

Our recovery begins, and it will take weeks, months, even years in some cases. When the floodwaters first receded, we discovered that our apple tree that’s planted on the grounds beside our beloved shop was still standing with its young roots intact. Despite record floodwaters of over twenty feet, our little apple tree still stands, bearing fruit and hope.

Thank you all for your kindness and your willingness to come together for us and for the Appalachian community. There are no words to express how deeply we love and appreciate all of you.

“In the essential prose
of things, the apple tree
stands up, emphatic
among the accidents
of the afternoon, solvent,
not to be denied.”

– excerpt from “The Apple Tree” by Wendell Berry

They have also organized a flood support link:

‘Please continue to share our resources page at appalshop.org/floodsupport. We’ve managed to raise thousands in direct aid and get immediate help to so many folks in need thanks to our community, and the needs will continue in the days and weeks ahead.’ 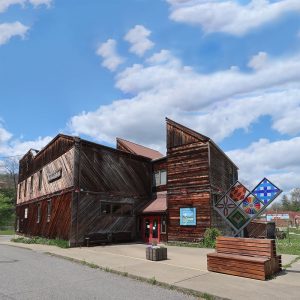 ‘Appalshop started as a film workshop in 1969, and 50 years later we’re still documenting and revitalizing the traditions and creativity of Appalachia.

We tell stories that commercial industries don’t tell. We challenge stereotypes with Appalachian voices. And we do it all with artists who are from and committed to this region.’

Sgt. Maj. Tim Lewis of the Kentucky National Guard escorts three boys to a helicopter for evacuation from an area inundated by floodwater. Reportedly, crews have made more than 1,200 rescues from helicopters and boats.

I am testing again tomorrow. Hopeful for just one of those little lines. Still coughing and a sore throat, but the congestion is way better. I haven’t had an appetite, just drinking tons of fluids. If I could get money back on all my recyclables, I might be able to purchase a small Citroën. And today, the kindness of new acquaintances from Limoux who sent me a message saying they have some food for me they made, this cold tomato soup (vitamin C!), and an incredible Chile relleno casserole. Are you kidding me?! Yes! Please. Unpacking their goodies after they left them for me downstairs, the aroma, just looking at it (!) encouraged hunger pains. :)  Margot and Fred, you are the best French friends une fille Americaine could ever dream! It must have been mana because I thought I died and gone to heaven. It’s been a lot of days of pain (break, not pain) & fromage. This was welcomed and incroyable! Angels on our path. 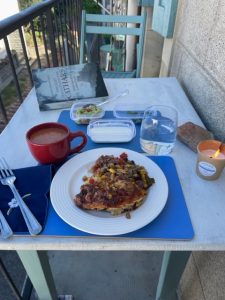 Bonne appétit to me! ♡

The woman who owns my building who is in the hospital with Covid is now conscious  and out of her coma. Her sister will be with her in Carcassonne on Tuesday and her daughter will be joining next week. Promising developments. She has been so ill. She was vaccinated, but not boosted.

Reading & researching lots about Languedoc…langue d’oc, the language of Occitan…John the Baptist…😳…and Lazarus, Cathars, Inquisitions, Gospel of John, more Cathars, Mary Magdaline, the Waldensians and Albigensians, pelicans and wisdom, consolamentum, Zoroastrianism, Manichaeans, Bogomils, sacred geometry, Gnosticism, D U A L I S M (a fan…big time), Descartes, Pope Innocent III, Evil, Rex Mundi. This: “Think how many turns the line of development of forces must have taken to come from the Gospel preaching of love to the Inquisition.” Indeed. And hasn’t stopped.

Reading about Pope Francis’ apology this week, begging forgiveness from the Indigenous People in Canada for the “evil committed by so many Christians.” He cited the cultural destruction and physical, verbal, psychological, and spiritual abuse of children in residential schools run by the Catholic church. Awful, awful history. All I kept thinking in context of this region I’m now living and the medieval history, is that his plea needs to go way back. Waaaaaaay back. Yeah, thinking of you Pope Innocent III and Pope Gregory the (not so) Great. How different history could have unfolded without the Council of Nicaea in 325 CE, and basically Roman Catholics. (The Pope is looking ahead to the 1700th anniversary of the Council of Nicaea, as a “source of unity between Christians.” Nope. Hard no. Christians and unity, kinda not a thing  (especially at Nicaea).

Some books to find after researching today: 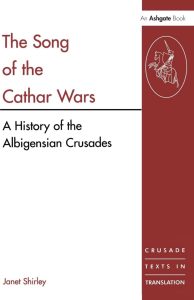 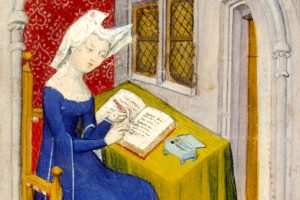 Stalked by the plague, ‘The Maiden of All Our Desires’ follows a medieval abbey at a time when monastic life was a refuge for women, “Revolutionary women thinkers like Hildegard Von Bingen, Julian of Norwich & Sor Juana Ines De La Cruz.” Just published in February:

And this book from two researchers who made a discovery viewing a painting and decided to dive in on the backstory of enslaved people during Louis XIV’s reign, 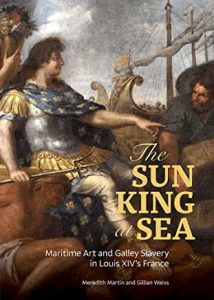 I was able to sit in on a virtual presentation with art history professor Meredith Martin and historian Gillian Weiss as they ‘unveiled an uncommon picture of art and power in the dawn of modern France through a look at the depiction of slavery, in ship and artillery design, militaria, paintings, and prints.’ What’s fascinating is there is little known about maritime enslavement during this time. Love these finds. One of my most cherished research discoveries was made combing through the Archives at DePauw University in Indiana a few years ago, literally stumbling upon something I had no idea existed. Huge. Saving it for my book. :)

I have an idea… 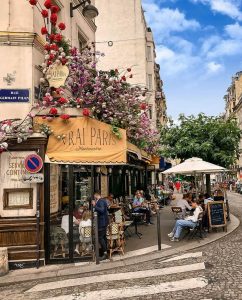 Let’s meet for breakfast in Montmartre. 400,000 lower income Kentucky residents, many racially diverse, will soon be without medical care because two white guys in Kansas believe the government should not help those in need. How were these marginalized groups informed, or not informed, about what could happen to them if they didn’t vote? This governor-elect, a conservative right-wing Tea Party candidate who was elected yesterday in Kentucky, was supported by huge donations from the Koch brothers during the election. Who voted? Conservative white people. Votes count. Every single one.