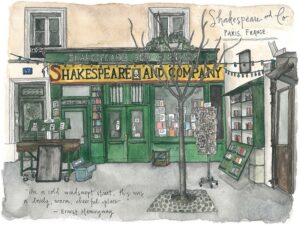 ‘Our minds our like crows. They pick up everything that glitters, no matter how uncomfortable our nests get with all the metal in them.’

For the thousands who die everyday from the pandemic still, whose deaths are only felt in numbers, not souls…1,000,000 total as of today. -dayle

‘Any disaster you can survive is an improvement in your character, your stature, and your life.’

‘What is to give light must endure burning.’

A prayer from Marianne:

‘I place my relationship with him in your hands. May my presence once again be a blessing in his life, and my his be blessing in mine. May my thoughts toward him be those of innocence and love, and may his toward me be the same. Amen.’

Where a (wo)man feels free. The Hemingway Seminar concluded on Saturday, Sept. 8th, at the Community Library in Ketchum, with a focus on Hemingway’s third book, A Farewell to Arms. At the ending presentation, University of Maryland english professor David Wyatt discussed the various 47 endings Hemingway considered, including an ending Hemingway’s friend, F. Scott Fitzgerald, pleaded with him to use.

If people bring so much courage to this world the world has to kill them to break them, so of course it kills them. The world breaks everyone and afterward many are strong at the broken places. But those that will not break it kills. It kills the very good and the very gentle and the very brave impartially. If you are none of these you can be sure it will kill you too but there will be no special hurry.

Hemingway would ultimately choose a different ending, and include 68 more pages after this one, which is found on page 216 in A Farewell to Arms, The Hemingway Library Edition, Includes the Author’s 1948 Introduction, Early Drafts, and All of the Alternative Endings (2012). The Bi-Annual conference moves to Wyoming in 2020 after Paris in 2018.

“We will begin in Sheridan, Wyoming, where A Farewell to Arms was finished and end in Cooke City, MT, from where final drafts of Death in the Afternoon and To Have and Have Not were mailed, with stops at the Little Bighorn Battlefield, Yellowstone National Park and Hemingway pertinent towns – Cody, WY and Red Lodge, Montana. The Hemingway Society invites you to join us in 2020 to celebrate the 80th anniversary of For Whom the Bell Tolls, experience some of the America’s most pristine wilderness, and explore the final frontier of Hemingway scholarship.”