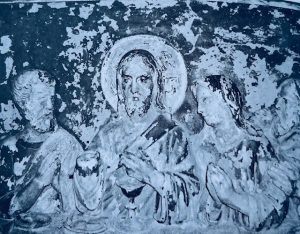 From the church of Saint-Volusien in Foix, constructed in the 12th century, although the original structure was most likely constructed in the 9th. Volusien was a bishop in the regions in the late 5th century. He was persecuted by the Visigoths and placed under house arrest. He died without regaining his freedom.

‘She squatted in from of an old altar.

“Look,” she said pointing to a relief where the paint was partly peeled off. It was the scene from the Last Supper. However, in this painting there was no doubt that the person next to Yeshua was a woman. In contrast to most of the paintings, the one by Leonardo da Vinci being the most well known, in this one Mariam sat to the left of Yeshua instead of to the right which is usually the case. In this painting in the church of Foix she is looking devotedly at her partner. Everyone apart from Mariam, of course, is depicted with a beard.’ ‘It may very well be that the Catholic Church in general has had its problems with Mary Magdalen. However, this does not seem to be the case here in the south of France.’

“We went under the porch supported by a few symbolically decorated pillars, which formed an impressive entrance.

She pointed to a star of Mariam hanging on a pillar next to us. 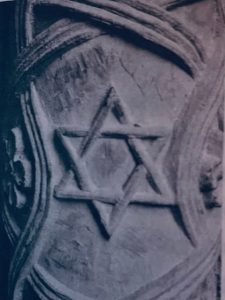 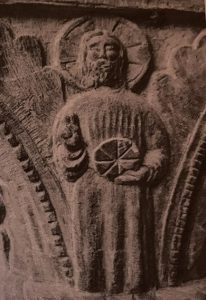 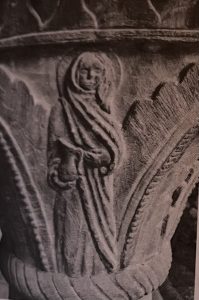 This book is beyond, truly. A trilogy bound as one book, the hardback, which I have, is only available from the author, Lars Muhl, in the book shop at Rennes-les-Chateau.

Gaining new levels of knowledge and taking so many notes; building bridges between my research from the last seven years for a new heart-based paradigm for journalists, intersecting a radical compassion for a homo spiritus species.

Marianne Williamson posted this earlier today from her essay titled, ‘Growing our Wings.’

Okay, but I don’t think that’s the whole story; I think one day home sapiens standing erect will be seen as the middle of the page. We’re not done with evolution until we’ve evolved from ape to angel. One day, on the right side of the page there will be a human being having grown wings… 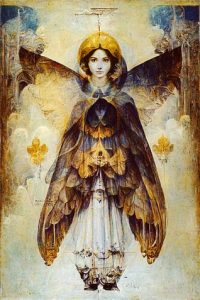 Now I don’t think those wings will be literal, of course. But I think we’re only at maybe the midway point in our evolutionary journey. We have physically evolved, but spiritually we are somewhere between an infant species and something just past barbarian. Evolution is spurring us on but we sure better hurry up.

We’re burning through all that insanity now. We have to or the species will not survive. […] The world is so clearly laboring now – a difficult labor indeed – as we struggle to give birth to the next version of who we are.

We’re not done yet. We’re transforming. No longer can we simply hug the ground. That is not our destiny. We are growing our wings.

Julian Lennon speaks to this in his own way, too, with a new album dropping on the 9th simply titled, ‘Jude’, in reference to the song Paul McCartney wrote for him when his dad, John, and his mum, Cynthia, were divorcing, ‘Hey Jude.’ This is a single from the album, ‘The Lucky Ones.’ #Jude @JulianLennon

Everyone is searching, trying to find a new religion
Some peace of mind,
Don’t wanna let go of all of my intuition
I need a sign ’cause love is blind

I feel a change is coming, I know
A new revolution’s knocking on my door

Everyone is hurtin’ tryin’ a find a real solution
Well, you might find that love ain’t blind
The world is burning while we’re dancing in our own pollution
Well, is there time, or did we cross the line?

We gotta find a way to get better
The only way through this is together
It’s not too late, so never say never

Today was reading, writing, researching, hanging laundry (ℒℴve ! the scent of clothes after drying on the line…the best…using only the energy from the sun.),

meditations, contemplation, and plotting the next Languedoc adventure. :) 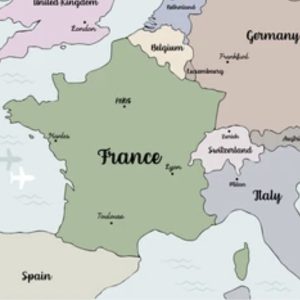 Take a good look at your life right now. If you don’t like something about it, close your eyes and imagine the life you want. Now allow yourself to focus your inner eye on the person you would have to be in order to create your preferred life.

Notice the differences in how you behave and present yourself; allow yourself to spend several seconds breathing in the new image, expanding your energy into this new mold. Hold the image for several seconds and ask the Beloved to imprint it on your subconscious mind. Do that every day for 5 minutes or so. If you share this technique with certain people, the chances are good they’ll tell you that it’s way too simple. It’s up to you what you choose to believe.

And for September’s Power Path, a message from Lena.

The main theme for September is: “CRISIS”

The definition of crisis comes from the word “to decide”. It is an intense time or turning point where a decision is made, there is a decisive point, and a change takes place. There is always an action component to crisis and often a need to make a choice that influences a course of action. In a healing crisis, you either get better or worse sometimes depending on that choice. In a financial crisis you may need to make hard decisions that change your usual habits and patterns. In relationship crisis you may be forced to look at some truth and face choices that produce needed change. A health crisis is often a wake-up call to change something significant in your life that puts you on a different path.

When we hear the word crisis it often brings up a negative response. In truth, crisis is often the catalyst for much needed change supporting movement towards necessary and positive evolution. Our physical nature is designed to respond to crisis with reaction and action, the instinctive response of fight or flight. Crisis often brings up fear. If we can work through the fear, there is power on the other side. This month is a good one to work proactively with the theme of crisis and use it as a catalyst for making whatever change is needed instead of being crippled by the fear it may temporarily produce.

Think of this as a month of potential breakthroughs as we are forced to go within for deep reflection and introspection regarding our values, habits, patterns, beliefs and actions. Much of the work this month will be around relationships and our perceptions of who we are, who we are with and what our work here is on this planet. Crisis that affects a community will either bring people closer together or fragment what is ready to reorganize itself differently. Crisis brings truth to the surface that can clear the decks of calcified attitudes and support new insights. Aspects of this month are conducive to clearing the mind of old beliefs and ways of thinking, opening us up to new and more inspired ideas. 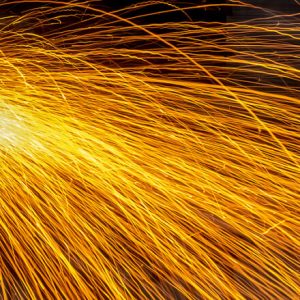 As much as the crises occurring this month could be manifested outwardly, the work triggered by them is internal. Even the action component points to internal movement and change as a deep purification of the mind and our beliefs takes place. Crisis is an intense experience brought about by sudden news, a dramatic unexpected event, or some situation that has gathered enough energy to itself that you can no longer ignore it. The only way to deal effectively with crisis is to face it proactively with curiosity, confidence, trust and humor. The worst thing you can do is to withdraw into a fearful state of blame, shame or anger.

This is not an easy month but the end result of your inner process can be extremely rewarding. The key is to work with the influences instead of against them. If crisis comes into your life, watch your reactions. Get to neutral as quickly as possible, don’t take it personally, but do use it as a catalyst to do something differently. Crisis requires flexibility as your decisions may not be ones you usually make. Use curiosity as a proactive way to lean into the crisis with the intention of bringing a creative solution or decision to the process.

We do not expect every moment of this month to be full of crisis, however this is an energy that is permeating much of the common experience, and we as a collective need to move through it proactively beginning with our own inner transformation and positive change. Being in conflict can cause a crisis and the more we can resolve our own inner conflicts the more we can be a positive influence on others. This is a month of taking responsibility for our relationships, for our actions and for our personal experience of crisis.

There will also be periods of heightened awareness, increased intuition, a celebratory sense of gratitude, and rich experiences in relationship, intimacy and connection to spirit. Cherish those times of expansion and beauty, and use them as a point of reference when you find yourself in the trenches of crisis.

Balance is another necessary support this month. Practicing balance between being and doing, between the mind and the heart, and between obsessive overthinking, overcontrolling and over organizing, and the potential chaos of too loose of a container are all important. Use the natural elements as support and try and spend time between inner and outer expressions. It is good to express spiritual needs but maintain order at the same time. A good routine that handles both will be helpful during any crisis. [thepowerpath.com]

Found this on my phone, a random shot wandering the medieval streets of Arles earlier this week.