Once we allow the entire universe to become that alive and dynamic, we are living in an enchanted world. Nothing is meaningless; nothing is able to be dismissed. It’s all whirling with the same beauty, the same radiance. In fact, if I had to name the Big Bang in my language, I’d call it the Great Radiance. About 13.8 billion years ago, the inner radiance of God started radiating into forms. All these billions of years later, we are the continuation of that radiance in our small segment of time on this Earth. We can either allow it and let the Infinite Flow flow through us, or we can deny it, which is really what it means not to believe.

This is not something I can prove to anyone. This is nothing I can make logical or rational. It’s only experiential, and it’s only known in the mystery of love when we surrender ourselves to it, when we grant the other inherent dignity and voice—the plant, the animal, the tree, the sky, Brother Sun and Sister Moon as my Father Francis of Assisi put it. 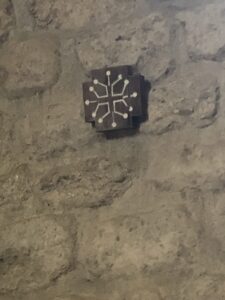 Some historians believe they banded together after losing their men to the Crusades, which left behind mainly criminals and louts — beguines were not confined to the cloister. Many ministered to the poor and sick outside their walls. Lifelong celibacy was not required either. They could leave the order and marry (but not return).

Traces of these remarkable women and their idiosyncratic spiritual ways can be found today in the urban islands of quietness they once called home. Known as beguinages or begijnhofs, several dozen of these compounds are still intact (to varying degrees) from England to Germany. Ten years ago Unesco declared a select group as World Heritage Sites. No country has more beguinages (29) than Belgium, and a trip to inspect a few in three cities seemed like a pleasant way to spend a spring day, especially given the ease with which one moves by train in that convenient nation.

In its modesty, this beguinage is reminiscent of a poorly endowed college at Oxford. The bourgeois values of peace and tidiness govern all beguinages, elements that look forward to the airy clarity of the Enlightenment rather than back to the Gothic sublime of the Middle Ages. 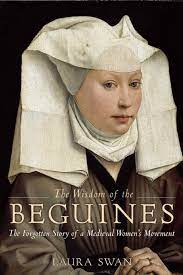 These were “independent women who defined for themselves what it meant to live according to gospel values. Beguines were not nuns. They used their sources of income to purchase homes near the chapel or parish church where they gathered together for prayer. They emerged in the midst of a so-called first renaissance when European society was transforming itself from a narrowly defined structure of a great many peasants.

Several factors propelled this renaissance and supported the emergence of the beguines, including the Crusades and courtly culture, emerging cities and their fledging universities, a new money-based economy, the growth of lay spirituality and the cult of the Virgin Mary, as well as new monastic orders.

Additionally, there was a phenomenon called vita apostolic, which means the ‘apostolic life’ or ‘the life of an apostle.’ Beguines were a powerful expression of the vita apostolica.

Leading profound simplicity, beguines pooled their resources in order to serve the sick and destitute by building and operating infirmaries and almshouses.

And many women became beguines as a result of their newfound literacy.

A heretic is a person who allegedly corrupts established faith doctrine, often by selecting a limited set of beliefs and denying the other parts of orthodox teaching.

It was a highly charged political environment in the medieval world.In a society strongly defined by each person’s specific place (such as belonging to the guilds or merchants, to aristocratic or religious classes or the the peasantry), beguines were violating their ‘God-assigned place’ in order to serve the gospel.

Beguines were under church investigation at different ties and in different parts of Europe for their spiritual independence.

While most beguines were quite orthodox, there were some religious laywomen who did join the Cathars, the Free Spirits, The Spiritual Franciscans, and other suspected heretical movements.

Beguines showed great strength and persistence and collaborated with fellow seekers, tolerated diversity, and raised difficult questions; they exercised both communal and personal wisdom and freedom to follow God as they felt called.

The story of the beguines affairs that women have contributed far more to spirituality and culture than history books have traditionally acknowledged. Their voices proclaim a divine presence that years for relationship with each of us.

These medieval women offer us hope and a fresh path: to think creatively, to collaborate to achieve change, and to live with prophetic courage.” 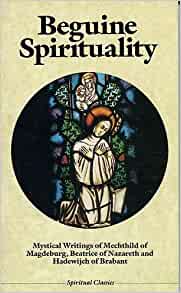 “A movement, rather than an order, there was no single style or pattern of beguine life.

While reacting against the wealth and ostentation of secular society, the beguines did not see poverty as an end in itself, rather they encouraged the development of the virtues of charity, humility and companionship.

Beguines worked in hospitals, visited the sick in their homes and established infirmaries.

As the church became increasingly paranoid concerning the presence of heterodox teachings, and brutal it its attempt to eradicate those it conceived of a threat, beguines, along with Jews, witches and various other sects, found themselves vulnerable and subject to frequent accusations of heresy, with often terrible consequences.”

The French mystic Marguerite Porete was burned at the stake in Paris in 1310, after a year and a half of imprisonment. Her crime was to repeatedly refuse to appear before the court of the inquisitorial commission to answer charges relating to her book, The Mirror of Simple Souls. During her trial, she refused to swear the oath required of her by the inquisitor’s office and she showed no remorse for having violated an injunction to withdraw her book from circulation after it had been publicly burned several years previously. Many who witnessed her execution were said to be moved to tears by her piety.

Little is known about Porete, apart from the record of her trial and what can be gleaned from her writings. It seems likely that she was associated with the beguines, a women’s religious movement which spread across northern Europe during the 13th and 14th centuries. Although the beguines devoted themselves to charity, chastity and good works, they took no religious vows and their lifestyles varied greatly, from solitary itinerants (of which Porete was probably one) to enclosed communities. The beguines were part of an era of vigorous spiritual flourishing during the Middle Ages. They were condemned by the Council of Vienne (1311-1312), which also condemned the Free Spirit Movement with which they were sometimes (and probably erroneously) identified. Although the beguine movement declined dramatically in the 15th century, some beguine communities survived until the early 20th century. The beguinage in Leuven in Belgium is a Unesco world heritage site, and to wander through its quiet cobbled roads and enclosed gardens is to feel a poignant sense of the lost history of women’s lives. 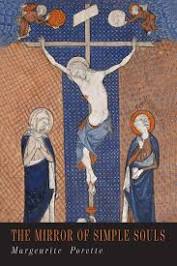 And this, by Allysha Lavino…recommend highly. 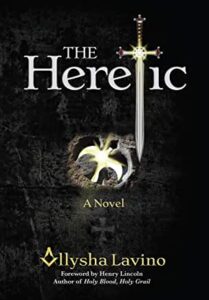 My review from 2020 for Amazon, Trust the Magic:

Henry Lincoln chose to See, and now, Allysha has chosen to See with the eyes and wisdom of the Divine Feminine in The Heretic. Having both discovered their place in the universal pattern, Allysha invites us through beautiful and brilliant storytelling to find our own place through sacred geometry while meeting the Good People, the ancient Cathars, in Southern France. Reading The Heretic, I had the remarkable context of a Sacred Mystery Tour with Allysha and her husband, Mark, co-led by Sir Henry, to visit the sites revealed in the Languedoc region of Southern France. My hope is that if you’ve landed in this virtual space—”nothing is done par hazard” (p. xv)—either directed by the Divine Feminine or a passionate friend, you, too, will be called to physically explore the ruins and profound spiritual places Allysha excavates in the pages of The Heretic. If not, this book will be your experience. Allysha has magically captured through character and compassion the Wisdom resting beneath all things, the dualism of good and evil. During this time of pandemic and global social sadness, Allysha reminds us through her ancient research and inspired writing that suffering cannot destroy us, beauty is in everything, “though the world around us was filled with the shear chaos of the unknown” (p. 217). She gently encourages us in her story to “trust the magic,” as she gathers what Emily Dickinson called the fruits of the spirit: patience, kindness, gentleness and self-control. It is Lily’s discoveries along with her young ethereal guides at the old hotel in Alet-les-Bains who encourage us to charge the awakening. I didn’t want this book to end—gratitude to Gaia it is a trilogy! Allysha, “thank you for your wisdom…your joy…your peace…your guidance…your strength…your love (pp. 265-266). As Henry writes in his Forward, “The world has been preparing Allysha for this task for years, unbeknownst to either of us.” Baphomet, friends…the path awaits.

Author Beatrice Bruteau [1930–2014]: “We need a new theology of the cosmos, one that is grounded in the best science of our day, so that all the world turns sacred again.” ‘The journey to becoming the hero of your own story isn’t easy … but it is a well-marked path.

There are certain signposts, trials, and tribulations every hero must undergo in the process of becoming. While Your Path will certainly be your own, there is a crucial first step to embarking on any quest.

ASK TO BE SHOWN THE WAY.

This might look like a prayer, a wish, a hope, a whisper, a willingness, a plea …  It is a conscious pulling on one of the strings of the quantum web, so that the music of the Quest may begin.
“…it’s all part of the process. The Initiate has to set out on the quest without knowin’ where she’s goin’. It’s in all the stories … Along the way, there are clues and tests. The Initiate has to gain new awareness and use all her skills to survive and complete the quest.” ~THE HERETIC

The key to questing is that you don’t know where you’re going. It is all ways a journey into the UNKNOWN. That is how I know that we’re all on a Quest right now.

I may not know what the terrain ahead looks like, but I do have some experience with the process. No matter where we go, or what we may become, the spirit of the Quest is the same.

The possibility of initiation is being offered to each of us.

Will you ask to be shown the way?

It will take courage. You’ll have to choose in every moment. And you do not get to know the way. It is a step of trust … of courage … into the Unknown.

It may not be for the faint of heart …
But some of you are ready.

‘…remember, it just means to CHOOSE.’

“Wonder and amazement are as old as the Earth.  Magic, myth, and merriment are our deep inheritance.  As the world changes – we change – yet the beauty of this birthright shines ever-bright within and around us.

I’VE GOTTEN SPECIAL PERMISSION TO RELEASE ONE OF MY FAVORITE CHAPTERS of THE HERETIC to YOU!” “Don’t worry — no spoilers!  I just want to let you in on where the story begins … with a village priest in a hilltop hamlet called RENNES-LE-CHATEAU, and the CODED PARCHMENTS that would change Everything.

I HOPE YOU’LL LOVE DIVING INTO THE ADVENTURE.”

“P.S. If you have any friends who are into ancient mysteries, spiritual transformation, codes & ciphers, or math & magic … make sure they get on our mailing list right away!  www.AllyshaLavino.com/Join-the-Heretics

The Kickstarter Campaign launches January 14, 2020 with the first opportunity to pre-order THE HERETIC and other amazing offers, but the EARLY BIRD SPECIALS WON’T LAST LONG!”