‘I use my body as it was meant to be used, as a vessel of light, to express ℒℴve. I protect my body against the assaults of modernity from thoughts of

to the contaminates of the physical environment, infusing my body with the light of the divine.’

Marianne’s prayer is basically a Cathar approach to their beliefs. There’s a devil and a god and that everything material (including the body) was the domain of evil, and the ethereal soul was the domain of God and that life was about the keeping the soul GOOD and PURE. To be a light and a conduit for spirit. Baptism was a vessel of purification. They revered John the Baptist. If in this life they did not achieve their goal, the goal of purity, they were reincarnated. Not unlike the Hindus belief of samskaras (earthly conditioning) and moksha, ending the cycle of death and re-birth through purification at the Ganges River in Varanasi, India. The underlying similarities between many religions and faiths is truly remarkable, especially in the Jewish faith and practices in Egypt and Iran. There was a lot of borrowing and re-shaping over the centuries, and yet, the ugly inhumane violence and destruction in the name of those beliefs is beyond understanding. The Cathars would probably just say, “Well, yeah. That’s the Rex Mundi part of this existence, the evil…the devil. The human experience.”

Might be a good time to listen to the ever optimistic Coldplay with their song ‘Humankind.’ I listened to it today after Rolling Stone posted about the group’s new video for the ‘Music of the Spheres’ track. They’re holding on to h o p e for the humans. 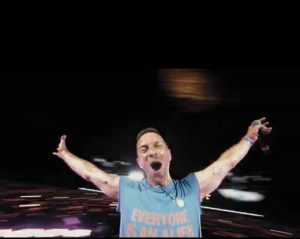 Coldplay Break Out the Fireworks for Euphoric ‘Humankind’ Video

Some of us, especially in the u.s.a., just need a lot more practice. 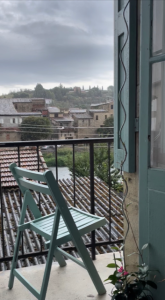 It rains in France!

Now, bring on the flooding since the drought has dried everything and the earth can’t absorb. You know, I think the river already looks higher. They run these test sirens for flooding that sound like WWII air raids. Glad I had been told me about them early after my arrival or I would have taken shelter under the bed thinking Putin had gotten feisty. From France 24 and AFP News:

‘The French weather service warned Wednesday of flash flooding risks across much of the south, where a historic drought has parched the rugged Mediterranean hills, a day after fierce rainstorms lashed much of the country.’

And the fires. Spain firefighters are having a harrowing effort battling blazes as have many in France this summer. 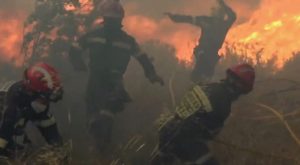 ‘Firefighters ran from towering flames as they tackled the Bejís fire in Castellón, eastern Spain, on Tuesday afternoon, 16 August. Footage shows firefighters repeatedly shouting “fuera”, which means “get out,” as huge flames and plumes of smoke close in. The fire has burned over 1,900 acres (800 hectares) so far. Around 1,000 people have been evacuated from their homes, Valencia’s president Ximo Puig said. At least 11 people were injured after they evacuated a train travelling near the flames through Castellón.’ 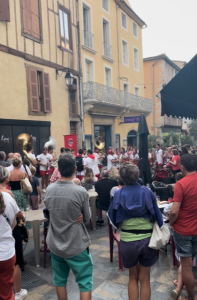 With the rain, lots of reading and research today. One of my favorite things is unlimited time and be surrounded by books and journals. Divine grace. Learning so much about the deeply layered history of this area, along with Egypt and Spain. I hope to visit a number of the ruins and villages I’m reading about, although getting there is going to be tough without a vehicle; cell phone service is precarious in some of these places too, to be able to fetch a ride from a taxi service, if…big if…they want to drive to the places I need to go for drop-off and pick-up. I’m going to look into some day tours, too.

And found another site, too, with great visuals and history of the Cathars and Languedoc/Occitanie region.

‘And so we beat on, boats against the current, borne back ceaselessly into the past.’ -F. Scott Fitzgerald

My favorite place to be.

‘I believe the spiritual realm is so enmeshed with the physical that it is imperceptible. I believe in the mysterious nearness of my ancestors, but I believe they are located at the site of my own blood and bone.’ -Fr Richard Rohr

Oui! Or, as they said in Languedoc before they were overtaken by French kings and the Catholic church, ‘Oc!’ Yes. They had their own language, although not far from some of the French language. The dialect is so different here in this region and most likely the reason NOBODY UNDERSTANDS MY SIMPLEST OF FRENCH WORDS. Pronunciation. It’s mauvais. <sigh> Just wrong. It’s going to take me awhile. There’s a food server here I’ve gotten to know and she’s helping with my French pronunciation. So kind. She has trouble saying my first name. It’s very ‘flat’ sounding, I think…just kinda falls, well, flat. But! When I told her my middle name and try putting both together, it was beautiful! Dayle Ann…only she said it with her French accent and blurred the two names. It was parfait! Perfect. I think my new French name is now DayleAnn. My family once called me that when I was a little girl because I was named after my dad, Dale. So, DayleAnn it is. :)