“Our life is frittered away by detail. Simplify, simplify, simplify! I say, let your affairs be as two or three, and not a hundred or a thousand; instead of a million count half a dozen, and keep your accounts on your thumb-nail.” When Less Is More

“Science tells us that we now have fewer than 10 years to reduce the human burden on Earth or trigger tipping points in Earth’s natural systems from which there is no return. Most discussion centers on the climate emergency, but we also have crises related to air, water, soil, species extinction, and more.

A viable human future depends on living with less. Does that mean sacrifice? Leaving more people behind? Or is this challenge an unprecedented opportunity to achieve a better future for all? The question of how much is enough, the theme of the fall 2021 issue of YES! Magazine, poses a foundational question for our time.

Let us look at several key areas where less could be more.

We face a defining choice. We can hold to course with an economy that grows GDP to provide a few with the opportunity to make a killing as they prepare to escape to outer space. Or we can embrace the current opportunity to transition to an ecological civilization, with a living economy dedicated to supporting us all in making a secure and fulfilling living on a thriving living Earth.”

How Much Is Enough?

Rebecca Rockefeller and Liesl Clark envisioned back in 2013 when they created Buy Nothing—a gift economy operated on a hyperlocal scale to bring neighbors together through sharing and community.

Neither a group, organization, association, or nonprofit, Buy Nothing is a movement that has doubled in size during the pandemic. It now has more than 4 million participants in 6,500 groups, located in 44 countries across the globe.

“It’s like a radical new economy, except of course it’s an old economy that has been around forever,” Rockefeller says. “We’re just re-presenting it.”

“Here we were studying this very old culture, up to 3,000 years old, while at the same time seeing that the modern folks were using their materials in a way that was so beautiful and eye-opening,” she adds. “The only way these cultures could survive was literally by always ensuring that the weakest were carried along with them.” 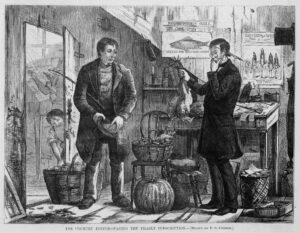