As I prepare my next exploration, I found a great website in my research today written by Val Wineyard. https://marymagdalenebooks.blog4ever.com She lives in the Languedoc region and studies the history of all things Occitanie, including the Visigoths. She writes,

My previous life was of Visigothic descent.  I decided to find out more about the Visigoths here in our region of Languedoc, the old Visigothic kingdom of Septimanie.  I was so fascinated by this I wrote a book called ‘The Visigothic Inheritance’ and am now working on another, ‘Barbarian Gold.’  Recently I started a blog all about the Visigoths, these little known and badly judged people.

I had long been interested in Rennes-le-Château, deep in the hills to the south of Carcassonne, because it was founded by the Visigoths.  As a mysterious centre it is endless – one mystery leads onto another;  especially when you enter the church and see for yourself how the unusual priest loved Mary Magdalene.  The whole village is devoted to her.

My conviction that the priest of Rennes-le-Chateau knew something that we didn’t about Mary Magdalene inspired me to write ‘Mary, Jesus and the Charismatic Priest’ and since then I just haven’t stopped writing about her, there is so much out there to know and learn and be fascinated and intrigued by.  It has all snowballed.  I do not, by the way, believe that she lived at Rennes-le-Château but at nearby Rennes-les-Bains.

Oui! These lands and villages hold particular intrigue for me, too. Deep mystery shrouded in tales of Templars, secret treasure, Roman Catholic Church popes and massacres, and the Good Christians, the Cathars. I am pulled to the places the author continuously writes about and researches. Recent inquiries have led me to a particularly harrowing historic event from 1163. More on that tomorrow.

To learn more about the sacred geometry I often reference, I’ve posted a short video from Sir Henry Lincoln, author of many books and investigations. The book you might be most familiar is The Holy Blood and the Holy Grail. It is this book that inspired Dan Brown’s The da Vinci Code. And Leonardo da Vinci lands prominently in the Cathar and Templar history. Sir Henry started his research in the ’70’s after finding an obscure little book he bought at a book shop for his French vacation.

This is a tale of the ancient treasures of the Visigoths. The late nineteenth century priest of Rennes-le-Chateau, Berenger Sauniere, supposedly uncovered this secret. According to the book he wants us to follow the clues he built into his domain as a legacy for the future. [Rennes-les-Chateau books]

It changed Sir Henry’s life. And mine.

Sir Henry Lincoln died on February 24th this year. Being back in this region, I think of him so much and wish deeply he was still with us. I have so many questions. He was made an honorary Knights Templar. I remember the day sitting around a table in Rennes-les-Bains when he reverently displayed his treasure. 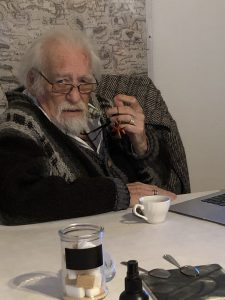 I miss him. All I keep thinking is, ‘he knows.’

Fascinating find. Had no idea this book existed. 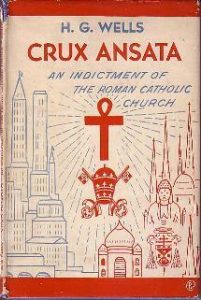 Crux Ansata, subtitled ‘An Indictment of the Roman Catholic Church’ by H.G. Wells, is a 96-page wartime book first published in 1943. Wells lived in London under the regular German Luftwaffe bombings from across the English Channel. He attacks Pope Pius XII and calls for the bombing of the city of Rome. And it’s also a hostile history of the Roman Catholic Church. Apparently Wells was an atheist and had a long history of anti-Catholic writings across many years.

Another spectacularly brilliant capture from the James Webb telescope. 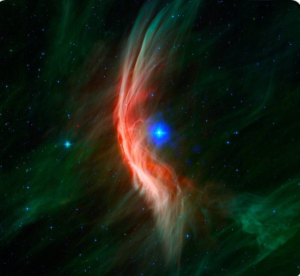 “A dramatic blade made of red gaseous wisps comes down top-to-bottom in the center of the image as smaller green wisps feather out in horizontal directions. A bright star shrouded in blue light is near the center of the bow-like blade. Blue dots in different sizes dot the background of the image, signifying neighboring stars.”⁣

As Alex spews his hates and lies in a U.S. courtroom, reminded today we can draw a straight line from a moment in history to his deceptions and deep ugliness. Today is the anniversary of Reagan’s repeal of the Fairness Doctrine, the corner stone of my academic writing. Thank you for the reminder, Jon Meacham. It was on August 4th 1987 a decision was made that altered the trajectory of our news and information platforms, and landed the U.S. amidst false prophets, conspiracies, lies and polarization. January 6th doesn’t happen if Reagan left it alone. It’s how we got Rush and the state propaganda known as FOX. (Not news, just FOX.) Think of it like this using the medium of radio as an example. Radio stations no longer had to show both sides of a topic and conservatives quickly outpaced liberals. Cue Newt Gingrich, too, and his ‘Contract with America.’  After that, Rupert Murdoch, Roger Ailes, and the FOX brotherhood. Devastating decision, Ronnie.