Feeling the same is way better than feeling worse. Cough, congestion, sore throat, no fever, and isolation. I’m going to test again tomorrow. I read earlier that we can still have symptoms without shedding. In France, isolation for 7 days required; most epidemiologists I follow say the U.S. guidelines for 5 day isolation, not enough. And many believe 10 days before the virus is no longer contagious. I’m finishing day four. The woman who owns my building who was taken to the hospital is not doing well; she’s connected to many tubes, although I don’t think they have intubated her yet. She was taken to the hospital in Carcassonne. I am waiting to hear prognosis and overall medical analysis.

So, reading, researching, writing, and drinking lots of fluids. My only living contact today… 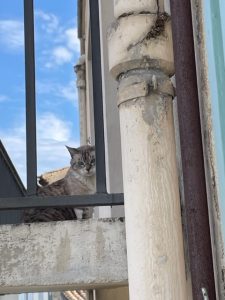 A French kitty! This is the first time I’ve seen this little guy, or anyone on this balcony. So sweet. Our only interaction seemed to be mutual admiration…:)…at least from this balcony.

And these folks. I love them. 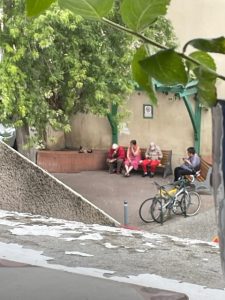 They meet everyday and just talk. One woman showed up with her pocket book, too, à la Queen Elizabeth. Others will join and leave throughout the day, and sometimes, they just sit together in silence. One woman was leaned way over for an extended bit of time, and the woman sitting next to her simply rested her hand on her back. So sweet and tender.

In Limoux, on the Place de la République, known as a ‘square’ in the U.S., although surrounded by cafes, outdoor seating, I never see laptops or people walking around carrying ‘go’ cups. Cafe au lait in France, at least in this region, is for pausing, and talking, sharing. It’s quite lovely. F-2-F c o m m u n i c a t i o n. What a strikingly powerful concept. U.S. culture could use some tips.

My thoughts are with the folks at Appalshop in Kentucky tonight, crushed by the devastation of the flooding they’re seeing surrounding their community building and hub. They posted this image and note earlier: 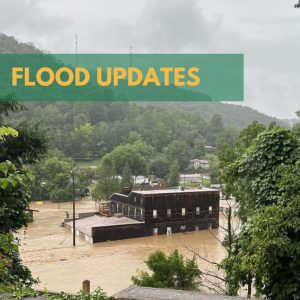 It’s heartbreaking to see our building like this, and more rain is in the forecast this evening. Our hearts are heavy and with all of our community right now as we face down a long night and a longer recovery ahead. More resources here: http://appalshop.org/floodsupport

“This is going to be yet another event that it’s going to take not months, but likely years for many families to rebuild and recover from.”

Heaven forbid anyone make a comment about a shifting climate–all the wackadoodles emerge. Speaking of which, did Sen. Joe Manchin wake up on a different side of the bed today? We’ll see how he feels tomorrow. 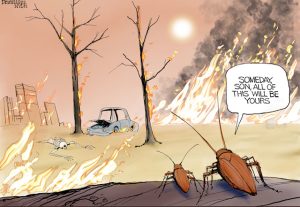 It’s Earth Overshoot Day. It marks the date each year when humanity has used up more natural resources than our planet can regenerate. For the next five months, every resource we extract is being borrowed from future generations.

Each year, Earth Overshoot Day happens earlier in the calendar. Humans are consuming more than the Earth can produce. We’re overfishing, overharvesting, and overdrilling – and it’s taking a toll on our planet.

We can give up, Climate Warriors. All actions, massive and minute, are needed. 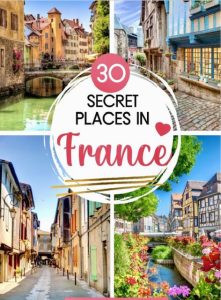 Shhhhhh. I’ll let you know. Researching for when I can explore again. 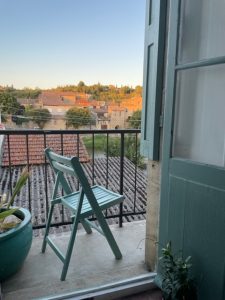 Almost finished with my latest Mary Magdalene book I picked up at Rennes-le-Chateau. Can’t wait to go back. Learning so much.

A beautiful and important life this man had. James Lovelock. I first learned about him in my studies a number of years ago. Brilliant mind, humble spirit, enlightened awareness. 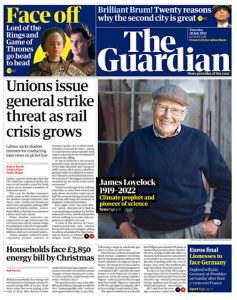 English independent scientist, environmentalist and futurist. He is best known for proposing the Gaia hypothesis, which postulates that the Earth functions as a self-regulating system.

Here’s a definition of the Gaia hypotheses:

The Gaia hypothesis, also known as the Gaia theory, Gaia paradigm, or the Gaia principle, proposes that living organisms interact with their inorganic surroundings on Earth to form a synergistic and self-regulating, complex system that helps to maintain and perpetuate the conditions for life on the planet. [wikipedia]

“The idea that humans are yet intelligent enough to serve as stewards of the Earth is among the most hubristic ever.” -James Lovelock in an interview with the Guardian newspaper, March 2010.

The U.S. government dropped a website for heat information this week.

‘The website brings heat-related weather forecasting, as well as health and safety information.’
—
Appreciate heat monitoring and safety, pieces on #climateanxiety. But. We must #LookUp. #Gaia is pleading for our help.
—
“Everyone of us can make a small contribution. It doesn’t have to have a huge effect if you look at it in isolation. Because it’s the sum of all projects that will make the change.“

“He quit Google to work on climate change. Now, he’s helping others do the same thing.”
https://www.fastcompany.com/90756666/he-quit-google-to-work-on-climate-change-now-hes-helping-others-do-the-same-thing

In July 2020, two former Google employees launched a Slack network for people who want to work on climate solutions. It now has more than 8,500 members.

‘If there’s so much shouting and screaming in 2022 about cutting emissions while keeping things running, imagine what that noise is going to be like as we get closer to the net zero target.’ Indeed. “The reason I’m leaving is because the scale, urgency, and tragedy of climate change are so immense that I can no longer justify to myself working on anything else, no matter how interesting or lucrative, until it’s fixed,” Kirpichov wrote in an email to colleagues. “I’d be lying if I didn’t say that I think others, who have the privilege of being able to do so, should follow suit. I like to frame the problem positively as ‘how much can we save,’ and every one of us can have a hand in saving something.”

Should climate change be my new career calling?

To paraphrase Naomi Klein, everything has to change. So where does that leave people like you?

If you haven’t had a chance to see the series Dopesick, with Michael Keaton and massively strong cast, you can still see it on Hulu. Incredible storytelling and acting about the opioid epidemic, how it started, and how it continues to destroy lives and families…communities…because of Purdue Pharma’s greed and the sociopathic Sackler family. Eight episodes. Watch for the breakout performance by Kaitlyn Dever as Betsy Mallum. Here’s the trailer.

I started watching it with no idea what it was going to be like–completely knocked out. It’s based on the book written by Beth Macy, ‘Dopesick: Dealers, Doctors, and the Drug Company that Addicted America.’

Just the other day I came across this animated short film about the power of addiction, the immediate highs, and then, the crash. It gives an understanding of addiction. It was apparently released in 2014 and is being revived by users on TikToK. It’s called “Nuggets” by Andreas Hykade.

“I wish I never would have tried drugs. Not even once.” Miss you D.

I received a link today from a group trying to help those with addiction into recovery. It’s from the outreach team at Start Your Recovery. They asked me to share it with Dayle’s Community Cafe. Here’s the link.

‘Start Your Recovery was developed by bringing together substance use disorder treatment experts from leading nonprofit, academic, and government institutions. Through this resource, members of your community can hear stories from people with similar experiences, discover the answers they need for recognizing and dealing with substance use disorder, and locate support.’

More from the U.S. Department of Justice and the NIC, The National Institute of Corrections.

StartYourRecovery.org provides helpful information for people who are dealing with substance use issues — and their family members, friends, and co-workers, too. We know that there is no one-size-fits-all solution to the challenges faced by those who misuse alcohol, prescription or illegal drugs, or other substances, and we aim to break through the clutter to help people at any stage of recovery.

Our goal is to offer people who are dealing with substance use issues a single source of reputable, objective information about signs, symptoms, conditions, treatment options, and resources — presented in a user-friendly format and in language that’s easy to understand. First we asked: “Why doesn’t someone offer access to these resources in one place?” Then we asked: “Why don’t we?” The scientist, environmentalist, and originator of the Gaia hypothesis, James Lovelock, envisioned a guide that could help survivors of a catastrophic event better understand planet Earth and how it works. (The Gaia hypothesis is the idea that Earth is a self-regulating system, developed back in the 1960s.)

“If widespread disaster befell the Earth, what would you need to know to survive? What could you learn from mankind’s accomplishments and failures?

These were questions James Lovelock had in mind when he wrote an essay for Science magazine in 1998 titled “A Book for All Seasons.”

If widespread disaster befell the Earth, what would you need to know to survive? What could you learn from mankind’s accomplishments and failures?

The scientist, environmentalist, and originator of the Gaia hypothesis envisioned a guide that could help survivors of a catastrophic event better understand planet Earth and how it works.

Eighteen years later, a version of that guide has materialized as The Earth and I (TASCHEN Books, 2016), a collection of essays by scientific thought leaders—including theoretical particle physicist Lisa Randall, biologist E.O. Wilson, and neuropsychiatrist Eric Kandel—and curated by Lovelock. The book provides insight into the intricacies of Earth and humanity, covering everything from the planet’s geology and fossil records to how tools have evolved into today’s technology. Whimsical illustrations and infographics by British artist Jack Hudson illuminate concepts described in the text.

“We are buried beneath mountains of fast accumulating data,” Lovelock writes in the introduction. “Rather than adding to the data load, this book aims to offer real understanding.” Together the essays act as a sort of primer to the Anthropocene, what some scientists consider a new geological epoch marking mankind’s profound influence on the planet. The book’s overarching theme is examining how we got to where we are, and what the future holds.

Science Friday recently chatted with Lovelock about how the collection came together, whether his Gaia hypothesis has changed over time, and if he’s optimistic for the future of the planet amid recent and vast environmental changes.”

How to Survive the Anthropocene