To be a projection of higher value. As I begin this day, I am open to receive. May my mind stay open and may I not deviate from things that are pure (Cathar) and true. Beyond the illusions of this worldly plane. I surrender to you my doings this day.

From Fr Richard Rohr, The Center for Action & Contemplation

‘In his book Coming to Our Senses, historian Morris Berman makes the point that our first experience of being alive is not through the visual or auditory experience of knowing ourselves through other people’s responses; it is primarily felt in the body. He calls this kinesthetic knowing. We know ourselves in the security of those who hold us, skin to skin. This early encounter is not so much heard, seen, or thought. It’s felt. That’s the original knowing.

Hopefully, our caregivers’ early gaze told us we were foundationally beloved. But when we inevitably begin to see ourselves through eyes that compare, judge, and dismiss, then we need spirituality to help heal the brokenness of our identity and our world.

It parts the veil and tells us that our primal experience was trustworthy. It tells us that we are beloved, whether we received that mirroring gaze or not. It reassures us that we live in a benevolent universe, and it is on our side.

The universe, it assures us, is radical grace.’

How do you dream? ‘In Bhutan, they dream of rainbows.

In countries throughout the world, even in countries where there are no snakes, the most common dream is one based on our (it must be) genetic fear of snakes.

But in Bhutan, they dream of rainbows.

The dreams might be consistent, but the way we talk about them clearly isn’t. Perhaps the dreams we remember and talk about have something to do with culture.

‘It is fashionable to be pessimistic about humankind — look at the assorted messes we’ve got ourselves into, and the undoubted evil that pervades the whole earth: war, poverty, child abuse, slavery, drugs, corruption of various sorts, racism and sexism, bigotry, hypocrisy — the list is depressingly long. Finding it impossible to comprehend that a good God would be concerned with such a hell, the Gnostic developed the idea that there were two Gods, the evil one who ruled the Earth, and the good God who lived in Heaven. Undoubtedly almost every individual who has ever lived has had some experience of this life as living hell, but without necessarily adding to it him, or herself.

Free of priests, gurus and dogma, the progress of our spirit is, perhaps terrifyingly, nothing more or less than our own responsibility.’ [Shades of Emerson.] 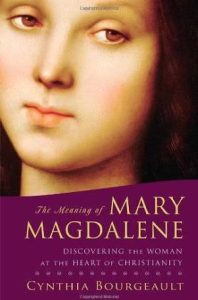 ‘It is clear that Mary Magdalene knew a good deal about that realm. At that spiritual tipping point where “no longer the object of my affection, he has become the subject of my truth,” a new energy emerges: pure (Cathar) creativity and effortless action. This is the “spiritual procreativity” described by both the Gospel of Philip and the poet Rilke.’

‘The Cathars left behind no magnificent church architecture, for they believed that the essence of Christ’s teaching was humility and an indifference to material possessions. The temple of God lay within us for He was approached through the heart.’

Went to a wonderful concert tonight for the community at Saint-Martin’s. The organist and the alto soprano were beautifully in tandem. And the acoustics! Those 12th century builders…they knew. :)

At one point in history, Saint-Martin’s was actually a cathedral. In 1316, after the Albigensian Crusade, Pope John XXII created a small diocese, centered here in Limoux. 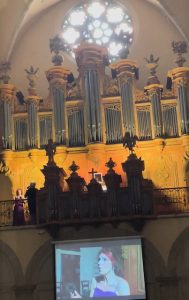 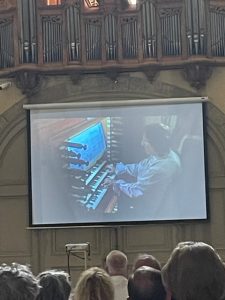 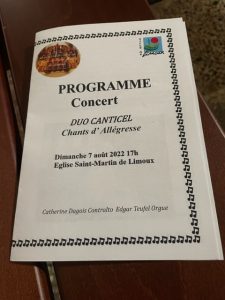 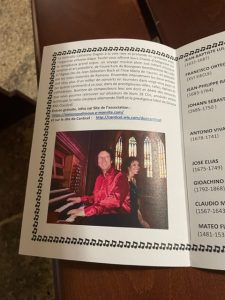 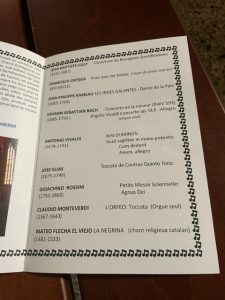 Reading in France tonight about the U.S. Senate vote today:

The planet continues to burn, and climate breakdown is painfully and frighteningly  real.

The Senate just passed one of the biggest bills to fight climate change, ever.
What’s in the “game changer” climate bill nobody saw coming.
by, Rebecca Leber ‘After nearly 18 months of haggling and 15-straight hours of weekend votes, Senate Democrats passed the Inflation Reduction Act on a strict party-line vote on Sunday.

The bill contains $369 billion in funding for clean energy and electric vehicle tax breaks, domestic manufacturing of batteries and solar panels, and pollution reduction. It is the single most important step the US has ever taken to combat the climate crisis. And arguably, it’s one of the single biggest investments ever made on climate in the world.

If the bill’s policies work as intended, it would push American consumers and industry away from reliance on fossil fuels, penalize fossil fuel companies for excess emissions of methane, and inject needed funds into pollution cleanup.

The bill uses tax credits to incentivize consumers to buy electric cars, electric HVAC systems, and other forms of cleaner technology, leading to less emissions from cars and electricity generation, and includes incentives for companies to manufacture that technology in the United States. It also includes money for a host of other climate priorities, like investing in forest and coastal restoration and in resilient agriculture.

These investments, spread out over the next decade, are likely to cut pollution by around 40 percent below 2005 levels by 2030, according to three separate analyses by economic modelers at Rhodium Group, Energy Innovation, and Princeton University. The legislation helps move the US a little closer to its stated goal of cutting pollution in half within the decade.’

And we can all do our part to contribute to the shift to save and heal our Gaia. We must.

“Earth repair is a participatory sport: a grassroots response to evolving global crises.”

She looks at community efforts to restore ecosystems the world over. “We’ve been trained to believe that finding solutions is a job for the experts,” she writes, but “Earth repair is a participatory sport: a grassroots response to evolving global crises.”

We may not know what the future climate is going to look like, and she acknowledges that not knowing is really hard. “But we’ve got to try,” she says matter of factly. “We’re here now … Just start.”

“There is no natural law that says profit must supersede other types of reward,” she writes. “The truth is, we are what we measure—or at least our actions are largely determined by how we gauge success. What if environmental healing, social engagement, and a commitment to the future governed our companies and institutions, and therefore our work lives?”

“We’ve all got places,” she says. “Places have their own ecological logic. Let’s do what we can where we are and learn from each other.” That idea of connecting with place and community is central to her worldview. “The ‘we’ who can address climate change is everybody,” she says.

“There is no one size fits all for climate action.” Schwartz says we need to protest oil companies and make art and grow healthy food and feed one another and, in her case, write—all using our respective skills to imagine a more resilient world.’ “At first there’s no path…and then someone bravely makes a step, and others join…just start.” Business is ‘blooming’ for one California landscaper in LA as homeowners and HOA’s pull out water thirsty lawns and replace with indigenous drought-resisting plants, bushes, and trees…
www.gardens4thesoul.com

(A huge motivation…besides the fact the state is running out of water…is that ‘the Metropolitan Water District of Southern California has paid $34 million in rebates to residents and companies ripping out their lawns.’)