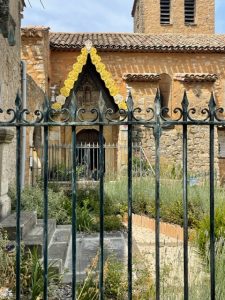 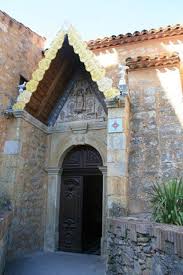 Mary Magdalene church at Rennes-le-Chateau near Couiza in the Languedoc/Occitanie region of France. Couiza is tucked in the foothills of the Pyrenees and is at the foot of the hill leading to Rennes-le-Chateau where The Church of Mary Magdalene is located. It was renovated by Father Berenger Sauniere, finished in 1897, the year of the dedication. Sauniere re-named it to honor Mary. It is believed an earlier construction was built in the 11th or 12 centuries. Above the door as you enter is a carving of Mary Magdalene and the inscription in Latin, “Terribilis est locus iste”–This is a place of awe.

‘Mary Magdalene has been a victim of mistaken identity for almost 20 centuries.’

It was a climb; five kilometers to the top. 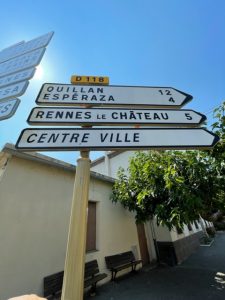 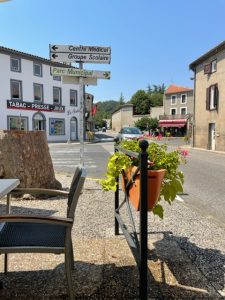 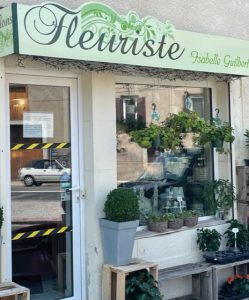 It really felt like a pilgrimage, like being on the Camino, which I loved since it was Mary’s Feast Day. A pilgrimage to Mary. And it was H O T. Again. 99 degrees with double the humidity from last week. I hadn’t planned on trekking it, but when the bus dropped me in Couiza, I couldn’t find a taxi to the Chateau. I stopped into various shops to find some taxi numbers. I called three numbers, each did not have a driver. Tried to locate one on my phone, didn’t work. I thought I might just take the bus back in about an hour, so had a café au lait and a Perrier. 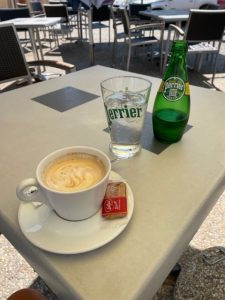 I really wanted to be there on Mary’s day, so I decided to go for it. Five kilometers is about 3 miles, so I plugged in the destination on my phone and headed up. Way up.

When the back of your hands perspire, you know it’s hot.

It was about then that my phone sent me a prompt to cool off my phone. Yikes. I had some water with me, though not enough. So rationed it. I rested in a couple of spots when I found shade, and I think it was in one of those spots where I lost my prayer amethyst. I think it fell out of my pocket. It’s loaded with prayers, so whoever finds it, I hope it has good energy for them. It’s so beautiful.

Because I chose ‘walkers’ directions, the little Map Genie took me on a path not frequently travelled and behind gates with markings that really looked like I probably should not have traversed. What the heck, Map Genie, seriously? 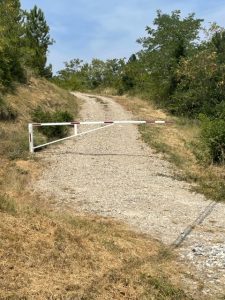 Lost and alone on some forgotten highway
Traveled by many, remembered by few. -John Denver

So, I kept climbing. Saw a ruin in the distance; not sure which one it is. Can’t wait to find out. Would love to explore… 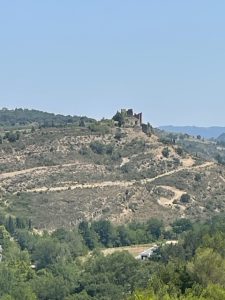 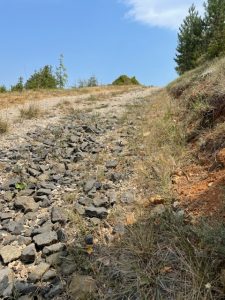 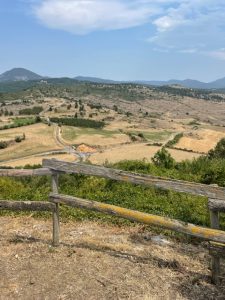 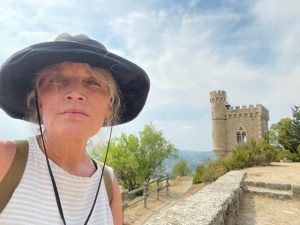 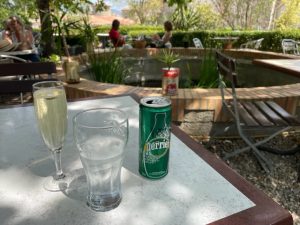 Time to visit with Mary. 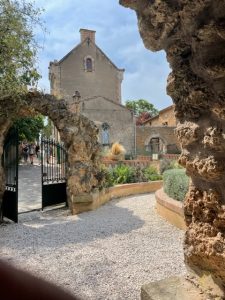 I want to learn more about this piece… 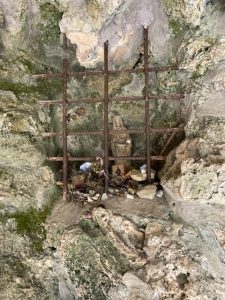 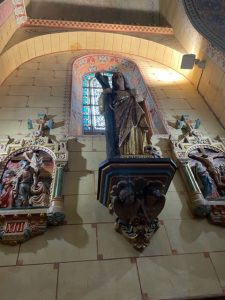 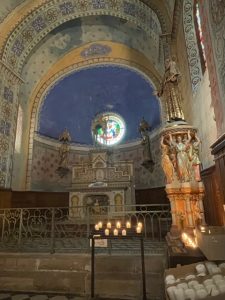 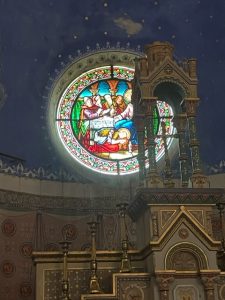 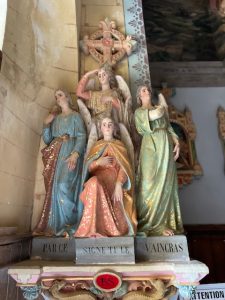 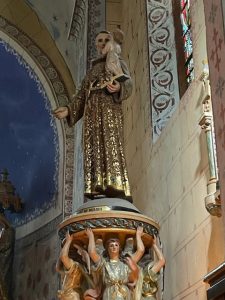 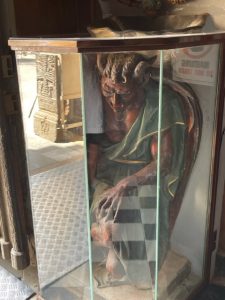 Rex Mundi. Cathars were dualists, the physical and spiritual deities. Rex Mundi was the false God – the chaotic god of material things, the Demiurge, and the embodiment of evil. Sadly, someone tried to attack the Rex Mundi in the church once, did some damage, too, so the caretakers put some protection around it. 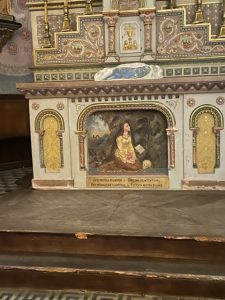 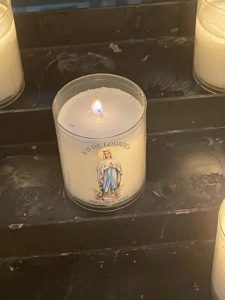 There are so many discoveries and histories…theories…with this church. The Languedoc region is thick with Cathar history, the Templars, Inquisitions, and Mary. And if you’re really into Chateau history and all things Mary, you’re a ‘Rennie.’ :)

If you’d like to learn more, check out the late Sir Henry Lincoln’s videos on YouTube, Henry Speaks. Fascinating history and Henry explains the sacred geometry studies in the region, too, i.e., how it all connects.

There are many studies and writings on Mary. One of my favorites is The Meaning of Mary Magdaline by Cynthia Bourgeault. It’s subtitled, Discovering the Woman of the Heart of Christianity. I think I flagged every page.

More from Henry with his books, too, like Holy Blood, Holy Grail, the pre-cursor to The da Vinci Code. And The Holy Place/Sauniere and the Decoding of the Mystery of Rennes-le-Chateau.

There’s a little book store on the grounds. 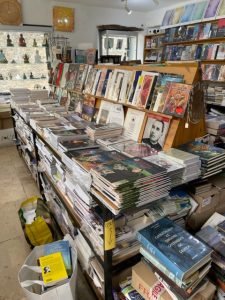 Found some great books for my studies, including this one which the author only sells (the hardback) at this little shop. 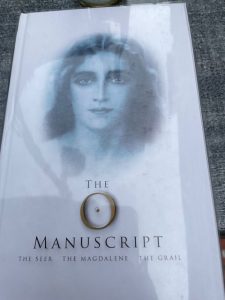 Started reading when I got back. So good.

“We were both familiar with the colorful story about the small town of Rennes le Chateau and the priest Sauniere who in 1886 during a major repair work on the altar of the local church, had apparently found a number of documents containing information which from one day to the next transformed him from a port minister on the fringe of society to a rich man with unlimited funds and a fashionable circle of acquaintances.

Sauniere had spent part of his fortune on the restoration of the church. He further built a new house, ‘Bethanie,’ as well as the tower, ‘Tour Mandala.’

Sauniere died in 1917 leaving the secret with his housekeeper of many years, Marie Dernaud, who promised to disclose it on her deathbed. 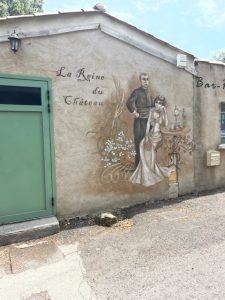 Unfortunately, when that day came in 1953, she was paralyzed by a stroke and thus was unable to disclose anything at all. Apparently the secret of Sauniere was buried with her.

Since then, the mystery had been made the subject of many speculations, several of which had revitalized the legend of Mary Magdalene and her alleged escape from Palestine to the South of France after the death of Yeshua” [p. 273].

Adrian, who works at the shop, helped me secure a taxi to get back to Limoux. He had to phone four different taxi services to find a driver for me. I told my daughter, when you travel, there are always angels on your path. 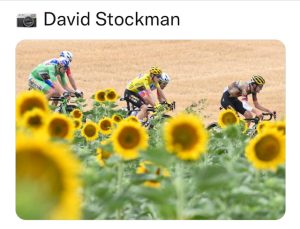 Crazy sprint finish today with a surprise winner…not so much the team. Jumbo Visma. The whole Tour has been insane and crazy fast. So fun to watch. Only two more stages going into Paris on Sunday! 🥂

This one in reference to yesterday’s Wout Route…

And this which sums up not only stage 18, but the entire Tour and how Jonas and Tedej respect each other and their sport. This connection occurred after Jonas clipped is pedal and wobbled and then when Tadej slid out misreading the line on the descent. Scary fast. And Jonas waited for him. Tadej reached for his hand as he caught up almost as if to say, “It’s yours.” He had attacked so much, trying to gain time, and then he handed the baton. And he didn’t attack again. Tender, and sweet moment to witness. 💛 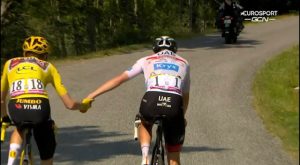