When we grant ourselves permission to live the life we want, there is little in the world that can stop us. Our weakness is often just a lack of faith – believing more in the limitations of the world than in the limitlessness of spirit.

Sometimes, it takes a long time to unfold, but it will.

So, what are your feelings about public loos? Annie and I spotted one in Grenoble. 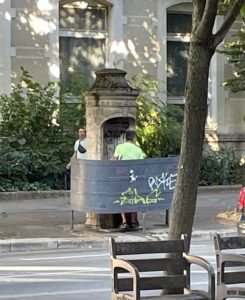 I said to Annie they need those for chicas, too.

Well, guess what. Reading in The Connexion French newspaper today they are! 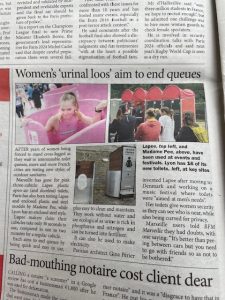 Tres chic. But. Will they have a view?

These two shots are from Paris. Wait for it. Another Emily in Paris reference. She’s surprised while talking with her U.S. boss on her cell when a guy behind her starts to urinate publicly in one of those stalls. Couldn’t find a clip. BUT learned they are in Paris right now filming season III. Can’t wait. :)

Covid has hit 22 Maison. The owner of my building who lives downstairs is quite ill, trying to determine if she needs to go to the hospital. She absolutely should. I’m trying to encourage her to go. Not yet. She’s from he UK and her French is weak, and it’s difficult for her to communicate with them. Her breathing is quite labored and she’s coughing a lot. She had some health afflictions before I arrived and they have seemingly gotten worse. Now we know why. She found out a French friend tested positive today who she was near on Friday and Saturday. The owner didn’t have any tests so I took her one of my boxes. Almost instantly positive. So I tested, too. Negative. I have cold symptoms now, so I’ll test again tomorrow and on Friday. Drag. I was near her on Saturday. And although outside, we share a common space inside. I’ve been so careful, for so long…masks inside anywhere, and on public transportation, as well as outdoors if there’s a lot of folks, like marches (ourdoor markets). Yet this BA.5 is highly contagious as we know, and cases are going up 50% in France every week. Monkey Pox is also prolific. Humans, we are a mess.

This virus is not going away. Only morphing. And no one…no one…is wearing masks inside or out. Or social distancing. Seemingly, just me. <sigh>

I’m vaxxed and double-boosted, so, hoping for the best.