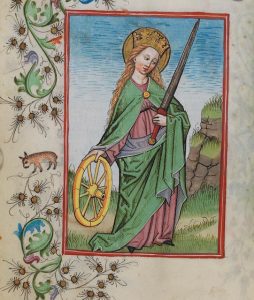 Reading today about the influences of Saint-Catherine of Alexandria, beloved of the Beguines and Joan of Arc’s spiritual voice and influence. She was 22 when she was tortured and murdered because she refused to marry an Egyptian emperor. She was killed in the year 305.

Britannica: She protested the persecution of Christians under the Roman emperor Maxentius—whose wife and several soldiers she converted while imprisoned—and defeated the most eminent scholars summoned by Maxentius to oppose her. During her subsequent torture, she professed that she had consecrated her virginity to Jesus Christ, her spouse, and was sentenced to death. The spiked wheel by which she was to be killed broke when she touched it (whence the term Catherine wheel), and she was then beheaded.

The wheel was a horrific way to die a slow, excruciating death. This is why we often see Catherine depicted with a wheel.

From the book, The Wisdom of the Beguines/The Forgotten Story of a Medieval Women’s Movement, by Laura Swan,

The Beguines chose four women who they felt had proclaimed the gospel for their lives: the apostle Mary Magdalene, the martyrs Saint Catherine of Alexandria, and Saint Agnes, and the abbess of Andenne, Begga. You smile with delight (p. 50).

Beguines were a powerful expression of the vita apostolic, being ‘apostolic life’ or ‘the life of an apostle.’ They pooled their resources in order to serve the sick and destitute by building and operating infirmaries and almshouses (p. 17, 19). Many beguines used their sources of income to purchase homes near the chapel or parish church where they gathered together for prayer (p. 15).

Many women became beguines as a result of their newfound literacy (p. 21). Beguinages endured the ravages of war and plague, hostile politics and shifting cultural attitudes […] some managed to survive all the way into the twentieth century (67). Beguines were not nuns (p. 13). Nuns were steady supporters of the beguines (p.15).

Some of the beguines were considered ‘heretics,’ of course. When men didn’t agree with women’s motives or rhetoric, they were ‘heretics.’ One beguines, Marguerite Porete, a larned beguines preacher and writer, was sentenced by the Inquisition to be burned at the stake. She was a learned beguine preacher and writer, and was murdered on June 1, 1310. Her crime? Her work of mystical theology called, ‘The Mirror of Simple Souls,’ which she had composed in Old French and shared with others.

My errors do not call for God’s punishment, but for His correction. As I atone for my mistakes—willing to make amends with a repentant heart—then His merciful hand will reorder events and allow me new beginnings. Such is the miracle of a merciful, non-judgmental God, the source of all good and the reason for my unending praise.

How awesome is the Beloved, for even when I have fallen from grace – from the truth within me, from the love that is the meaning of my life – She loves me still, allowing  me new life, again and again.

My gratitude is deep.

The light, pours in through the cracks.

From the Dalai Lama, a reminder this morning:

All 7 billion human beings have a common experience—we all appreciate love. We all have a seed of love and affection within us and the potential to cultivate greater love and compassion. If we want to create peace in the world it has to start with the heart, with inner peace.

Julian of Norwich called this love ‘a love without beginning.’

I came across an essay in my research today I haven’t seen in a while. It is so beautifully and intellectually written by a fellow explorer who was a part of our sacred mystery tour here in Languedoc in 2019. His name is Andrew Cowie.

My first fleeting glimpse of the near-mythical French village of Rennes-le-Chateau was suitably mysterious. Perched atop a majestic cliff in the foothills of the Pyrenees, she peeked out briefly and tantalisingly from behind a murky veil of mist before swiftly vanishing again, leaving behind only more questions and very little by way of answers. This murky first encounter seemed somehow to encapsulate everything about this magical village and the labyrinthine web of mysteries which entangles it – a place full of wonder and intrigue, its secrets forever elusive, the answers always remaining just slightly out of reach. Rennes-le-Chateau attracts tens of thousands of tourists every year, many of them treasure hunters drawn to the area’s rich history and mythology. Legends of buried treasure abound here, with the village thought by many to be the location of the riches of the Knights Templar or the Cathars, the resting place of the Holy Grail or the Ark of the Covenant. Some believe it to contain the tombs of Jesus and Mary Magdalene, while others claim it to be the site of a subterranean extra-terrestrial base. The area is a conspiracy theorist’s paradise and it’s easy to see why it has attracted this reputation. [Le château de Montségur, one of the last refuges for the Cathars, who, in mass, were burnt in giant pyres in the field below in 1244.]

Everything about this place, and the wider region of Languedoc, is jaw-droppingly bizarre, from geological anomalies and precise geometric alignments to extraordinary natural phenomena and a chain of endless peculiar synchronicities which cannot simply be dismissed as chance. Indeed, the further I ventured down the veritable rabbit warren of the Rennes-le-Chateau mystery, the more I realised that the truth is much, much stranger than any fiction my writer’s imagination could ever conjure.

It’s a thoughtful and passionate piece. Andrew is a former journalist; he wrote this about a year after our return, in 2020. He lives in Scotland. It will give you a great foundation for learning more about the mysteries of Languedoc, sacred geometry, and Rennes-les-Chateau. Here’s a link to the full essay. 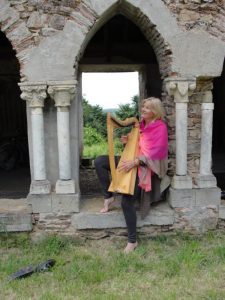 I’ve been listening to a lot of Ani William’s music since I’ve been back in France. Ani is a world-renowned harpist and singer, and has recorded more than two-dozen albums of original sacred music based on ancient spiritual traditions. She has done seminal work in the study of sound healing and the relationship between musical tones, the human voice and healing.

Here she is singing Aramaic Lord’s Prayer at Rennes-le-Chateau. Extraordinary.

The lyrics, the Aramaic Our Father:

Here and ow and for evermore.

Fill us with the power of your mercy

Lead us out of temptation: free us from ourselves.

From Ani’s website: The prayer knows no gender, and celebrates the Light and Sound of Creation, inviting this into our Holy of Holies within. This video was filmed in the chapel of Mary Magdalene. [https://aniwilliams.com]

U.S. states and activists started celebrating the labor force in the late 1800’s. New York was the first state to introduce a bill, yet Oregon was the first state to codify it into their state law. ‘Labor Day honors and recognizes the American labor movement and the works and contributions of laborers to the development and achievements of the United States’ [wikipedia].

“The miracle is not that we do the work, but that we are happy to do it.” 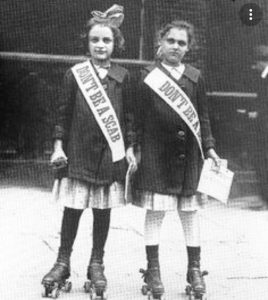 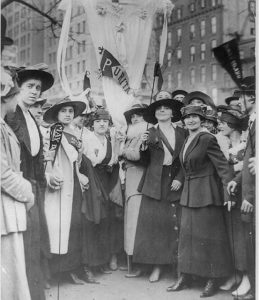 Roller skates and sashes. Can’t think of a better way to celebrate. Beats buying a mattress.

And a song from Woody Guthrie, about 1,200 striking coal miners and their families in Ludlow, Colorado on April 20, 1914. It refers to the violent deaths of 20 people, 11 of them children, during an attack by the Colorado National Guard on a tent colony there in Ludlow. The clip features the late historian, author, and activist Howard Zinn.