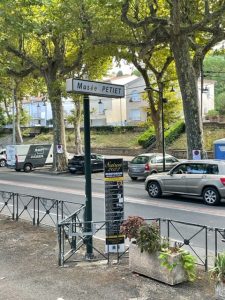 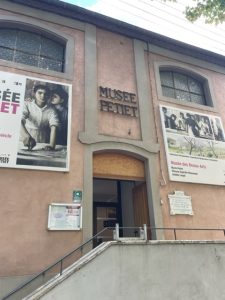 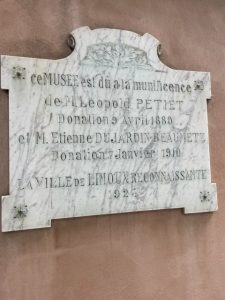 Marie was born and lived in Limoux until her early 30’s. It was after her dad died, also an artist, that she married and moved close to Paris. The discovery? Finding a Mary Magdalene painting! I think I actually exhaled an audible gasp. 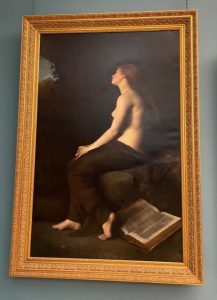 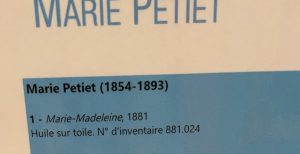 Marie was a beautiful painter. So talented. Look at her detail, and use of light & dark. 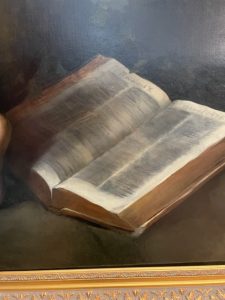 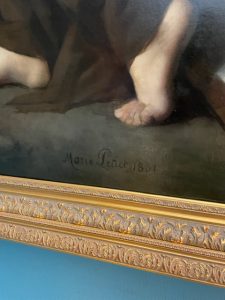 The photo on the right you can see she signed this painting with the year, 1881. She has positioned Mariam in a cave here in the Languedoc region, and she’s gazing at a hill in the distance. 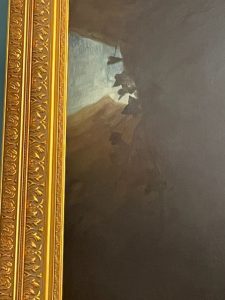 Could it be Rennes-les-Chateau, where the church of Mary Magdalen is located, or Le Bézu…maybe Bugarach? Trying to research and learn more. Many caves in this area, the Languedoc region, with theories and stories enveloping them. I have been to one where it is believed Mary Magdalene visited, near Rennes-les-Bains. She reportedly administered baptisms in the river there, River Sals. There are healing waters in that little ancient village, which at one time were frequented by Romans. Many authors and artists convene and live there now, as well as a small, private group of people who still practice the Cathar ways. This is where Sir Henry Lincoln lived. [Holy Blood, Holy Grail]

‘Marie Petiet began her artistic training with her father and uncle, who were wealthy landowners and amateur painters. Between 1877 and 1883 she studied in Paris with the painter Jean-Jacques Henner and exhibited regularly at the Salon. In 1886 she married the painter Étienne Dujardin-Beaumetz and continued to paint and exhibit her works, many of which were inspired by the working-class community in which she lived in the south of France.’ [Women Artists in Paris] 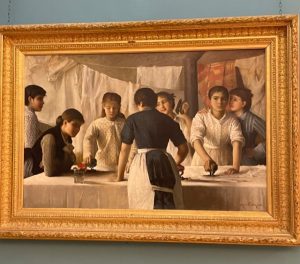 Marie was only 38 when she died. She did not have children. She reportedly lost her life to cancer. 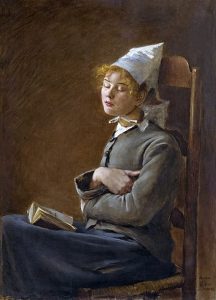 [Her work, Knitter asleep, was included in the book Women Painters of the World.]

The other discovery. Oh mon Dieu. Couldn’t believe it. From the 10th century. 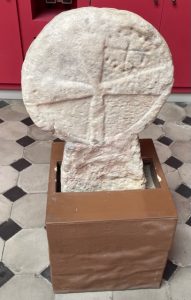 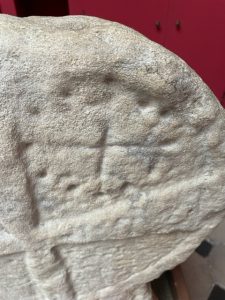 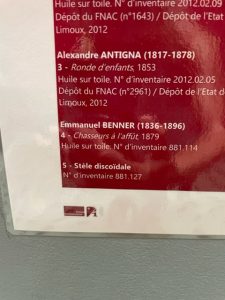 The identifier is listed at #5. Not much information. Yet researching later I found this: 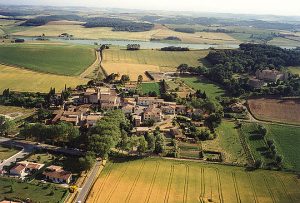 Baraigne is a commune in the Aude department in the Occitanie region of southern France.

‘Along the roads, you will see these surprising little funereal monuments.

The stelae are funereal monuments that date back to around the 10th century. With a solid surface, the stelae are made up of two parts: a foot of varying shapes surmounted by a disc. They are an integral part of the small heritage in the Lauragais.

Since ancient times they have been placed at the side of the deceased’s head to mark the location of the burial. Some think that they used worn grinding wheels which would explain their circular shape. They signal the presence of a grave and evoke the memory of the person buried through sculpture, of tools or a symbolic sign. Sometimes, they can also serve as milestones on Jacobean routes or mark a place of devotion’ [en.castelnaudary-tourisme.com]

This is a self-portrait Marie Petiet painted. 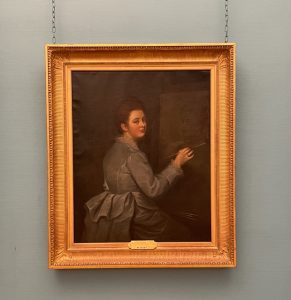 And here are photographs of Marie and her family. 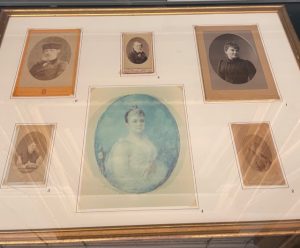 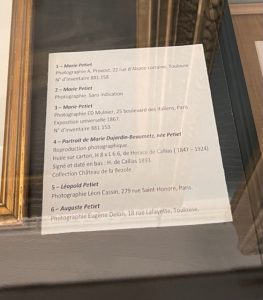 A day of discovery and research. Almost finished with ‘The Manuscript.’ More tomorrow. ℒℴve this book. 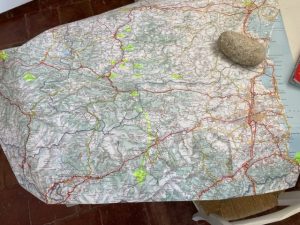 Plotting my next adventure, either south to the Mediterranean to visit an ancient village, or north to visit the villages of Joan of Arc.