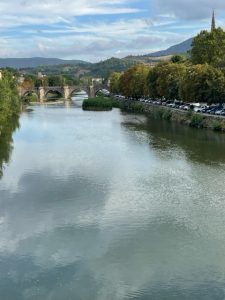 Today I left the city centre of Limoux and hiked about 30 minutes to the edge of the village to visit an ancient Basilica. 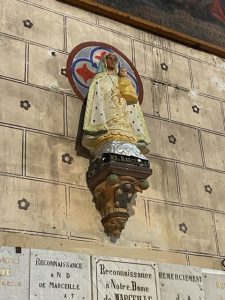 Where a Black Madonna is found and has drawn thousands of pilgrims to the Basilica for her healing energy, and waters, along the sacred path. 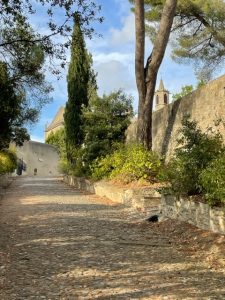 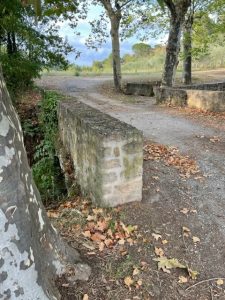 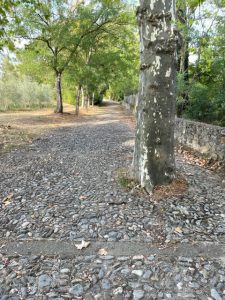 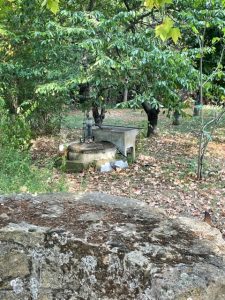 This is the ancient path approaching the Basilica. Look at these inlaid stones, and the old water pump.

‘There are many legends and mysteries associated with the basilica. It is even called one of the most mysterious places in the region. Legend says that a Black Madonna statue was found on the site of the church.

The plowman, who discovered the statue while cultivating the land, brought it to his house three times, but it returned three times to its former place. Therefore, there was the decision to build a chapel here, which was elevated to the basilica rank on February 5th, 1905.’

Side note: Basilica, in the Roman Catholic and Greek Orthodox churches, is a canonical title of honour given to church buildings that are distinguished either by their antiquity or by their role as international centres of worship because of their association with a major saint, an important historical event, or, in the Orthodox Church, a national patriarch. The title gives the church certain privileges, principally the right to reserve its high altar for the pope, a cardinal, or a patriarch, and special penitential privileges that remove the basilica from local geographical jurisdiction and give it international status. [Britannica.com]

Here is the source of the healing water. 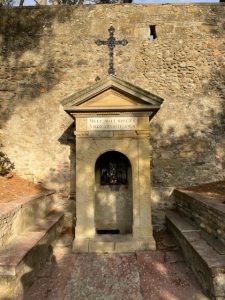 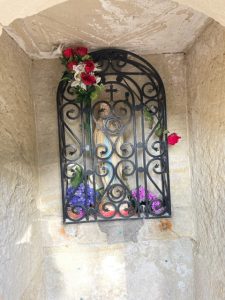 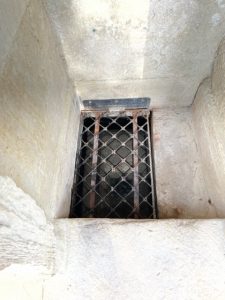 The translation above the water alcove:

‘A thousand kinds of evil, the virgin, washed away with water.’ 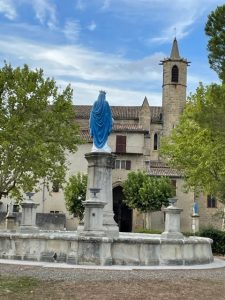 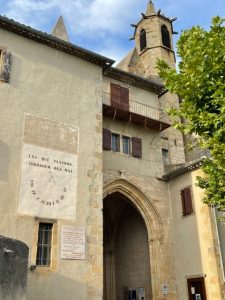 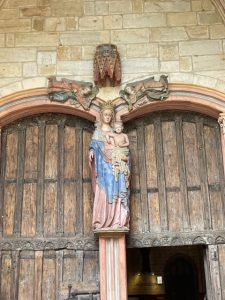 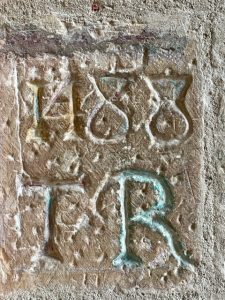 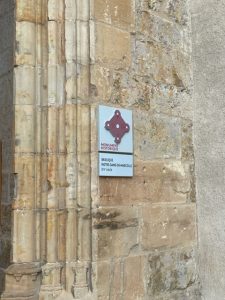 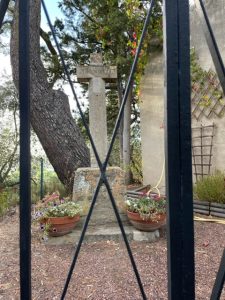 Although the historical marker lists the 14th century, it is, according to a pamphlet found at the Basilica,

‘it is impossible to date precisely the construction of the monument, but several writers believe it could have existed since the 10th century and might be due to Benedictine monks of St. Hilaire. A title dated from 1011 and reported in the History of Languedoc calls the place “Sainte Marie.” So, in one case or the other, this monument dates back from long ago.’ 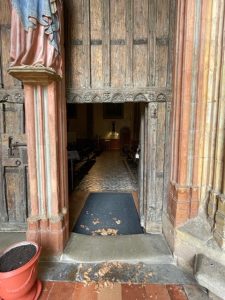 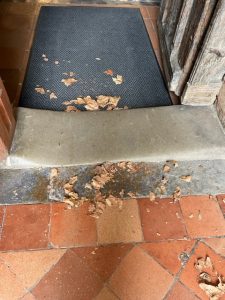 Look at the indentation on the entry stone. That’s a lot of feet! 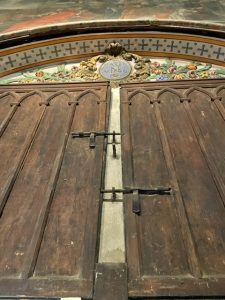 Dutch doors, high above the regular doors. I wonder if they ever open them. Notice the ancient hardware.

Mary Magdalene, Joan of Arc, Cathar crosses, all very prevalent inside the Basilica. Even the stained glass behind and above the alter depict Yeshua and Mariam. 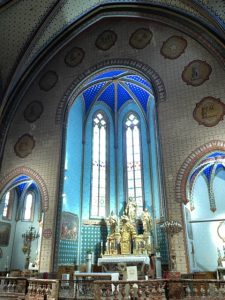 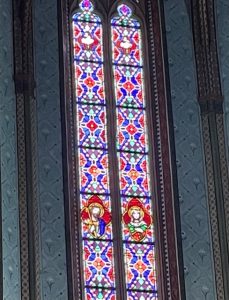 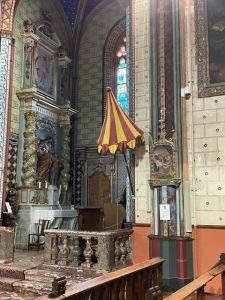 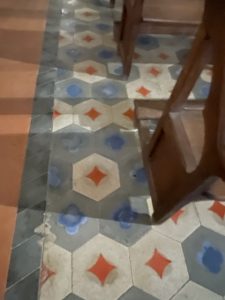 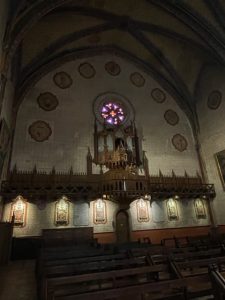 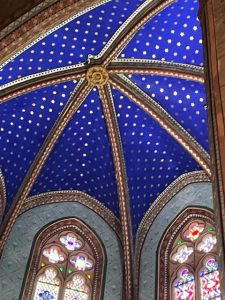 ‘She rests at last beneath the starry skies.’ -Robert Langdon 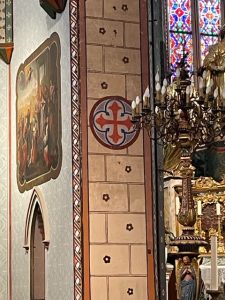 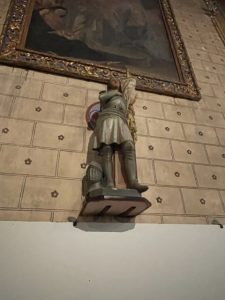 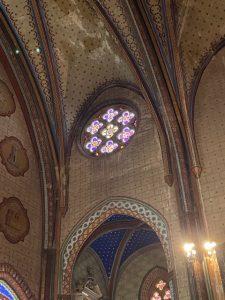 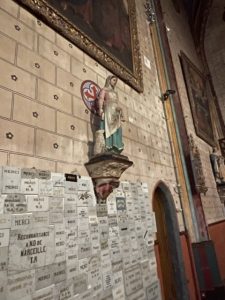 Saint Germaine, shown in the capture above,

St. Germaine Cousin was born near Toulouse in 1579. Her right hand was withered and paralyzed at birth. She lost her mother when she was only a child.

After the death of her mother, her father remarried and St. Germaine was treated harshly by her stepmother and was denied a real place of her own in the family home. She relegated to worked as a shepherdess for the family and slept in the stables. She was denied practically any contact with her stepbrothers and stepsisters.

While her homelife was horrible, her inner life was the opposite. She was a pure soul, in constant contact with God, daily praying the rosary and attending Mass. Germaine’s love of God spilled into her love for her neighbors and she would often teach local children the basics of the faith.

She died at the age of 22. Nearly a half century after her death her body was found to be incorrupt. When it was left exposed for a year it became the object of great veneration and the source of many miracles. In 1864, more than 250 years after her death, St. Germaine was canonized as patron saint of people with disabilities and those who have been abused or abandoned. She lived in the family barn, repeatedly refusing her family’s invitations to move into the house. She tended after her family’s sheep and preached the gospel to anyone who would listen. 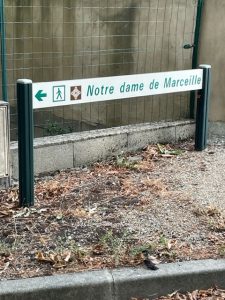 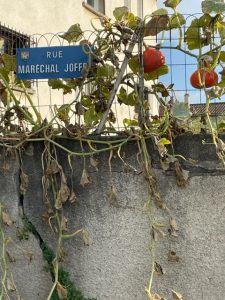 And, just learned France has a Labour Day, too. The holiday is celebrated annually on May 1st. In French, Labour Day is known as Fete du Travail, and traditionally celebrated by giving and sharing Lily-of-the-Valley flowers. Lovely. Along with Forget-Me-Nots, my favorite.