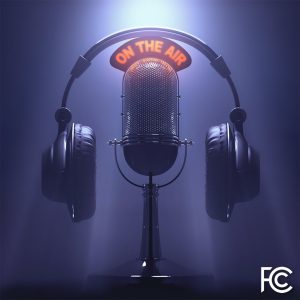 From Jessica Rosenworce, the Chair of the FCC [Federal Communications Commission]

“It’s National Radio Day! Did you know that Guglielmo Marconi broadcast the first transatlantic radio signal, 121 years ago in 1901?”

I Do! Radio was my everything.

Today I met a man while having a café crème under the trees sitting at a table outside a local establishment in Limoux. His name is Kumar and he’s from India. He’s trying to save his working money to buy a home in Bugarach, a village steeped in Cathar history, Alien refuge, and inspiration for some epic films. His family lives in Rishikesh and he hasn’t seen them in a very long time. He speaks his native language, very good English and French. Very kind. There was gentleness to his essence. He offered to tour Bugarach with me, sharing we would need to hitchhike since neither of us has a vehicle. After I shared the dangers of hitchhiking in my native country, he assured me we would be safe.

Bugarach is rocky peak the highest point of the foothills of the Pyrenees in Pyrenees near Corbières. It’s nearer to Quillan and Raines-les-Bains as well as Raine-les-Chateau. It’s quite lovely, and spiritually rich. The population is around 235. 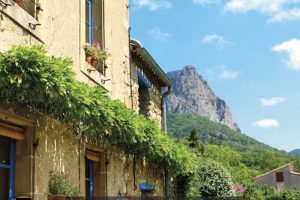 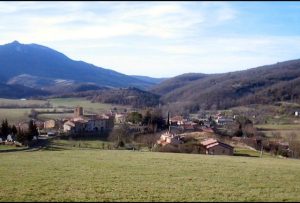 ‘Nostradamus, the French apothecary who supposedly came from nearby Alet-les-Bains is said to have found the “vibrations” of Bugarach to be positive. The Pic de Bugarach is said to be where Jules Verne found the entrance and the inspiration for A Journey to the Centre of the Earth.

The Nazis are said to have carried out mysterious archaeological digs at the top of the Pic de Bugarach (possibly true) and so are Mossad, the Israeli secret services (unlikely).

Interest in the site had recently skyrocketed with online UFO websites, many in the USA, advising people to seek shelter in Bugarach as the countdown to Armageddon draws near. 👀

Such digs here and at Montsegur are supposed to have inspired the film The Raiders of the Lost Ark. A visit to the Pic de Bugarach is said to have inspired Steven Spielberg’s film, Close Encounters of the Third Kind. The internet relates stories of the late President François Mitterrand being helicoptered on to the peak for reasons unknown.’ !!!

Esoteric theorists also associate the peak with the Cathars. This is the heart of Cathar Country and many esoteric thinkers feel a strong affinity with the dreadfully persecuted Cathars who held esoteric theories of their own. The last known Cathar Parfit was born near here at Cubiers and was burned alive near here at Villerouge Termenes. The ruins of a Cathar Castle at Le Bezu lie within sight of the Pic de Bugarach. https://www.midi-france.info/030606_bugarach.htm

Where are you watching the Vuelta?! 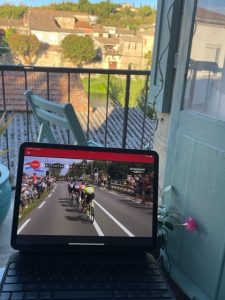 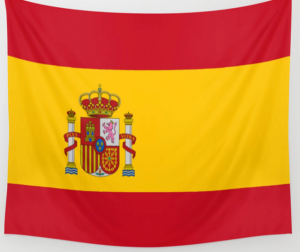 Did you see this?!

One of the largest megalithic complexes in Europe was discovered in Huelva, Spain. More than 500 standing stones were found during a land survey for an anticipated avocado plantation. Located along the Spain-Portugal border, the land on which the stones sit spans roughly 1,500 acres. 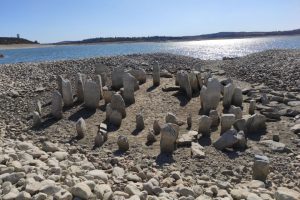 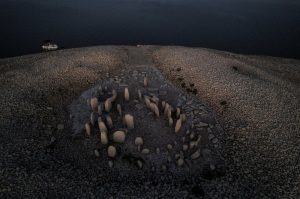 The stones were revealed because of the drought.

“This is the biggest and most diverse collection of standing stones grouped together in the Iberian peninsula,” José Antonio Linares, Huelva University and one of the project’s co-directors, told Agence France-Presse Thursday. Linares added that the oldest standing stones at the site were likely erected during the second half of the sixth or fifth millennium B.C.E.

One of the most striking characteristics of the stones, however, was the diversity of their grouping in one location.

“Finding alignments [a linear arrangement of upright standing stones along a shared axis] and dolmens [a megalithic tomb comprised of two or more standing stones topped with a large, flat capstone] on one site is not very common. Here you find everything all together–alignments, cromlechs [a stone circle] and dolmens–and that is very striking,” noted Primitiva Bueno, co-director and pre-history professor at Alcalá University, according to the Guardian.

Carnac in northwestern France is one of the most famous megalithic sites in the world with some 3,000 standing stones.