The heat is absolutely defeating me. Today the humidity was up twofold, so, yeah, I was done. It cooled off to 88 tonight around 10:30. The reading indicates a low of 62. Haven’t seen that yet. Never thought I’d believe 88 is cool.

It was the Tour! Final stage, into Paris. Some of my favorite captures. 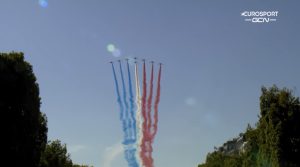 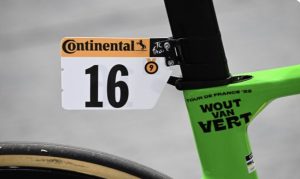 So great. Vert is GREEN in French. :) 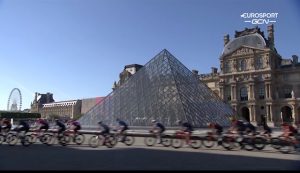 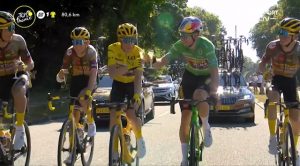 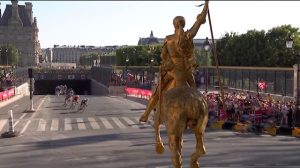 Joan of Arc welcoming the riders to the Champs-Élysées! This shot always knocks me out. The Maid of Orléans. Can not wait to visit the town where she was betrayed and put on trial then burnt at the stake in 1431, like so many women considered Heretics. Then I’ll drop down and visit her birth town. I believe her home was destroyed by the Nazi’s during WWII. A new structure was built to replace what was destroyed. Twenty-five years after she was massacred, her conviction was formally overturned. She became a saint of the Roman Catholic Church in 1920, 488 years after her death. Not unlike Mary of Magdala. Pope Gregory decided she was a prostitute and cast her out, 591 I think.Thanks for looking out for her Peter. Lord. In 2016 Pope Francis elevated the annual memorial of Mary Magdalene on July 22 to that of a Feast. She is fittingly called “Apostle to the Apostles.” (I wonder if the Pope understood the relevance of the numerical power of 22. Another post.) 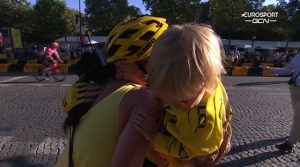 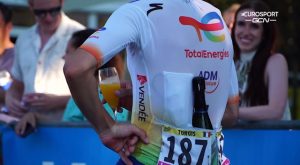 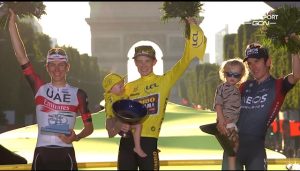 Spectacular tour. Incredible athletes. Simply unreal. Fastest Tour de France ever! Like Lance said, “I don’t even know this sport anymore.” It’s off the charts and massively fun to watch. Great guys, tough tour, lots of COVID, scary heat, and many injuries. Only a few teams made it with complete groups. UAE was down to four riders at the end. Eurosport/GCN did an incredible three-weeks of coverage! Thank you. Loved. 2023 is going to be off the rails! OK. Now the withdraws kick in. Seeing the Tour in France while living in France was incredibly special and so much fun. Watching it last year, who knew I would be here. Two stages! (So deeply grateful to science and vaccines.) Met some amazing folks. They love their tour. Vive le Tour! 🚴🏻

Earlier today I was able to visit Saint-Martin’s church, more of a cathedral really. Built in the 1100’s, although some believe the original structure was constructed in the 800’s. Look who’s at the church: 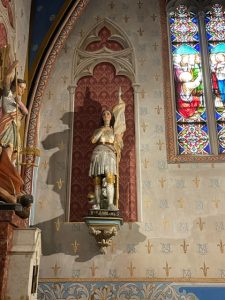 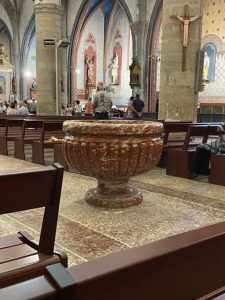 Massive baptismal font, right in the middle of the aisle heading toward the alter. 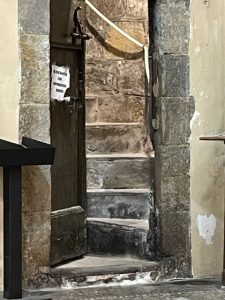 …and this door. Ancient. 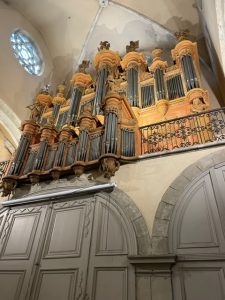 The acoustics were crazy. Just amazingly clear and full. The organist played and when the people of the congregation sang, it sounded like a massive choir. 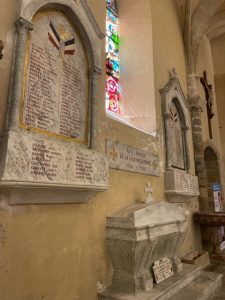 A memorial in the church to honor those from Limoux who perished in WWI. 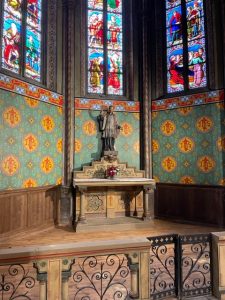 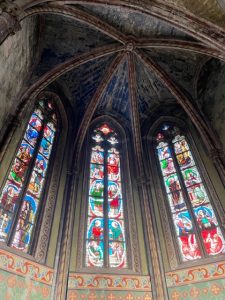 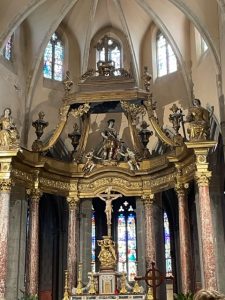 We may have a bit of a reprieve with the weather the next few days, in the 80’s before it gets back to triple-digits. After 20 days of 40C, I think I’ve hit my threshold. Hiking up to Rennes-le-Chateau on Friday for Mary’s Feast day wiped me. Another 103 day. But it was for Mary. And so wanted to be there for her. The Beloved.

Thinking earlier if the Cathars had survived, and Roman Catholicism didn’t, we’d be in away different place. More folks like St. Francis and Mary, and fewer like Pope Gregory. I think the matriarchy deserves some years of leadership, right? We certainly couldn’t do any worse. ‘Higher moral compassionate value.’ Jai Mary of Magdela.