For the little ones of Uvalde, Sarajevo, Dunblane and every place where innocent souls have been taken!#Uvalde #UvaldeMassacre #TexasSchoolMassacre #Children #innocent #Peace pic.twitter.com/71uLEQZUKB

‘How peaceful do you feel right now? Our nerves, our home and our country crave peace.’ -A. Stoddard 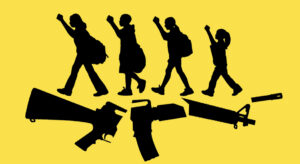 ‘Our writer argues that students should not return to school in the fall until Congress passes new gun-control laws.’

‘The argument that we’ve been here before, that the gun lobby has a generation of politicians in its pocket, that our political system, and particularly the structure of the Senate, will always give outsize influence to Second Amendment absolutists—all of it is true. And yet, as awful as it is to say, we’re learning with every killing. We’re moving closer to the kind of movement that might actually make a difference.

Today, I’m left with one conclusion: The children and parents of our country need to take the summer to organize locally, build a set of national demands, and then refuse to go back to school in the fall until Congress does something.

Let me explain. Social movements need two elements to be successful: narrative and tactics. Borrowing from the political scientist Joseph Nye, we might think of these as soft power and hard power, respectively. Activists need to tell a compelling story that brings people along to a new way of thinking and emboldens them to act. But that isn’t enough. There is also the hard work of mustering actual political power to elect different representatives, change laws, and leverage lobbying.

When it comes to narrative, those whose lives are most at risk in mass shootings make for the best storytellers. This has been a strangely hard-won realization. Dave Cullen, who covered the Columbine shooting in 1999 and later wrote a book about it, has said that in the days and even weeks after the attack, none of the survivors wanted to talk about gun control. Though a common right-wing talking point is that speaking about new regulations immediately after a shooting is “politicizing” the tragedy, few people pay this much heed anymore. “Everybody keeps telling us that it’s not the time to be political,” Kimberly Rubio toldThe New York Times, two days after her daughter was killed in Uvalde, Texas. “But it is. It is.”