I often contemplate, particularly now, where our country would be without the influences of Rupert Murdoch and the state media he has created in the U.S. He began his residency in 1974 and became a U.S. citizen in 1985 after relinquishing his Australian citizenship, the legal requirement for US television network ownership. He established the FOX News Channel in 1996, the same year former president Bill Clinton signed the Telecommunications Act, overhauling 60 years of regulation. Murdoch thrived. And he is destroying us.

New Zealand Prime Minister Jacinda Ardern said her country doesn’t have to deal with the “rage of older white men” because “we’ve never allowed Rupert Murdoch to set up a media outlet here.”

The veracity of the quote is being questioned. Regardless, he shouldn’t have been able to start his media empire here, and Clinton shouldn’t have sold us out. Cue Roger Ailes and Newt Gingrich and Rush Limbaugh. And here we are.

Our existential soup. Could we please hold off on adding any more ingredients? Maybe let this batch simmer for awhile.

Gen. Mark A. Milley on the Russian invasion of Ukraine: “We are witness to the greatest threat to peace and security in Europe – and perhaps the world – in my 42 years of service in uniform.” 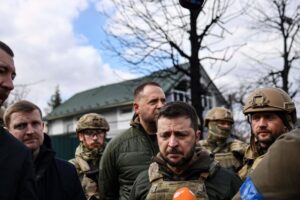 Ukainian President Volodymyr Zelensky (C) speaks to the press in the town of Bucha, northwest of the Ukrainian capital Kyiv, on April 4, 2022. – Ukraine’s President Volodymyr Zelensky said on April 3, 2022 the Russian leadership was responsible for civilian killings in Bucha, outside Kyiv, where bodies were found lying in the street after the town was retaken by the Ukrainian army. (Photo by RONALDO SCHEMIDT / AFP)

Anne Baring, The Dream of the Cosmos-A Quest for the Soul:

“Evil has its origin in this deeply unconscious predator-prey pattern of behavior. I think that, in relation to the harm we are capable of inflicting on the human beings, evil may be defined as the act of inflicting terror, suffering, humiliation, torture or yeah on an individual or group of individuals ranging in kind from the murder of a child to the atrocities currently taking place in Syria (2012) to the viciously cruel attacks on others on Facebook and Twitter. One of the most difficult things to recognize is that each one of us in capable of acting in a hateful cruel or evil way, or of being complicit in these ways of behaving, whether as an individual or as the member of a government, institution, corporate body or nation. […] The fact that an International Court of Justice now exists to try those who commit such crimes against human unity is evidence of collective progress in moral awareness. But this progress requires perpetual vigilance lest we slip back into old unconscious habits. [2013]

Ukrainian President Volodymyr Zelenskyy spoke to the United Nations Security Council today. Here is the link to watch his speech and listen to the statements by various countries after he spoke. There were technical issues with the video he wanted to share with the council, at about 1:15:00 into their remarks, the video was shown. We want to look away, we can not. Ever.

‘If Russia is not removed from the council, Zelenskyy said the body should just be dissolved.

“If there is no alternative and no option, then the next option would be dissolve yourself altogether,” he said.

The Ukrainian president proposed a global conference to convene in Kyiv to discuss reforms to the United Nations.

“It is now clear that the goals set in San Francisco in 1945 for the creation of a global security international organization have not been achieved, and it is impossible to achieve them without reforms,” he said.’

“I don’t know where we fall in the legacy of life.”
-Sean Penn

We crave leadership, and authenticity. 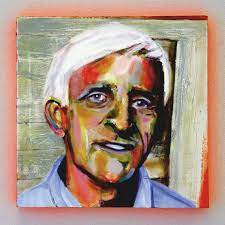 “Rabbi Heschel teaches that a prophet’s primary task is to interfere. Julian of Norwich, by calling us to interfere with patriarchy and heal the wounds that it has wracked upon human history and the human soul and the earth, beckons u from folly to wisdom. Are we listening?”

“Stage One people: At this level tend to be preoccupied with the pleasure, security, safety, and defense of their material state. And that extends to their morality: If it makes me feel secure, it is moral. Life is largely about protecting myself. This is seen in the endless need for war and guns, but little need for education culture, the arts, and spirituality. Stage One people are mostly dualistic, either/or thinkers, and frankly represent a rather sizable minority of humans. Their morality largely has to do with maintaining their group, and regarding their group as superior.”