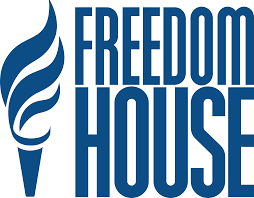 80 Years of Fighting Threats to Liberty

Freedom House is founded on the core conviction that freedom flourishes in democratic nations where governments are accountable to their people. 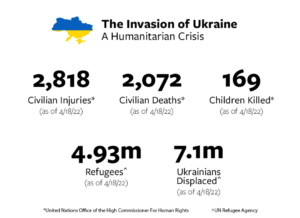 The invasion of Ukraine is an attack on democracy: Vladimir Putin cannot tolerate Ukrainians’ aspirations to build a democracy on Russia’s borders and has launched a war of aggression to prevent this from happening.

There is no legitimate justification for this war: Vladimir Putin is lying to the Russian people and the world at-large – Ukraine poses no threat to the Russian Federation. Russia’s actions represent a textbook example of what authoritarian governments are capable of doing, and underscore the importance of defending democratic freedoms around the globe.

We are watching a humanitarian crisis unfold: The military assault against Ukraine by Russian forces is exacting a heavy humanitarian toll – including a refugee crisis – that will extend well beyond both countries’ borders.

Russia and its enablers should be punished: Among the actions that should be taken – the UN General Assembly should move to suspend Russia’s veto on the UN Security Council, Belarusian dictator Alexander Lukashenka should be held accountable, economic sanctions should continue to be escalated, and assets controlled by Putin and his enablers and located in democratic regions should be seized. 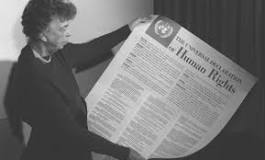 First lady of the United States of America from 1933 to 1945, Eleanor Roosevelt was appointed, in 1946, as a delegate to the United Nations General Assembly by United States President Harry S. Truman. She served as the first Chairperson of the Commission on Human Rights and played an instrumental role in drafting the Universal Declaration of Human Rights. At a time of increasing East- West tensions, Eleanor Roosevelt used her enormous prestige and credibility with both superpowers to steer the drafting process toward its successful completion. In 1968, she was posthumously awarded the United Nations Human Rights Prize. 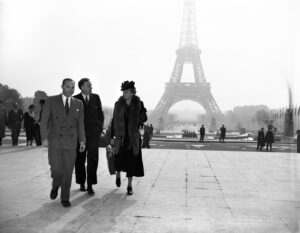 Eleanor Roosevelt arrives with other members of the U.S. delegation at the Palais de Chaillot in Paris, where the Universal Declaration of Human Rights was officially passed on December 10, 1948. (©UN Photo/Marvin Bolotsky)

To read the rights declared, follow this link: https://www.amnesty.org.uk/universal-declaration-human-rights-UDHR

Article 1: We are all born free. We all have our own thoughts and ideas and we should all be treated the same way.

Article 2: The rights in the UDHR belong to everyone, no matter who we are, where we’re from, or whatever we believe.

Article 3: We all have the right to life, and to live in freedom and safety.

Article 4: No one should be held as a slave, and no one has the right to treat anyone else as their slave.

Article 5: No one has the right to inflict torture, or to subject anyone else to cruel or inhuman treatment.

It was a rare, if not unprecedented rebuke against one of the five veto-wielding members of the U.N. Security Council.

U.S. Ambassador Linda Thomas-Greenfield called the vote “a historic moment,” telling the assembly: “We have collectively sent a strong message that the suffering of victims and survivors will not be ignored” and that Russia must be held accountable “for this unprovoked, unjust, unconscionable war.”