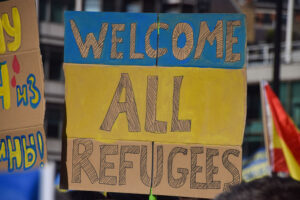 Liberation Without Victory
By Anne Applebaum and Jeffrey Goldberg

When we met Zelensky in Kyiv on Tuesday night, he told us the same thing: The optimism that many Americans and Europeans—and even some Ukrainians—are currently expressing is unjustified. If the Russians are not expelled from Ukraine’s eastern provinces, Zelensky said, “they can return to the center of Ukraine and even to Kyiv. It is possible. Now is not yet the time of victory.” Ukraine can win—and by “win,” he means continue to exist as a sovereign, if permanently besieged, state—only if its allies in Washington and across Europe move with alacrity to sufficiently arm the country. “We have a very small window of opportunity,” he said.

Then, as if remembering the role history has given him, as an avatar of democratic civilization confronting the cruelty of a lawless regime, he became reflective. “You realize that you want to be a member of a civilized society, you have to calm down, because the law decides everything.”

But he feels, viscerally, what so many Ukrainians feel. “There will be no complete victory for people who lost their children, relatives, husbands, wives, parents. That’s what I mean,” he said. “They will not feel the victory, even when our territories are liberated.” 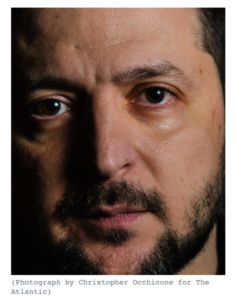 Posted by dayle at 1:50 pm
Filed in: Café Communication