“To control information is to control the world. This innovative history reveals how, across two devastating wars, Germany attempted to build a powerful communication empire―and how the Nazis manipulated the news to rise to dominance in Europe and further their global agenda.”

“Information warfare may seem like a new feature of our contemporary digital world. [And FOX media/Rupert Murdoch.] But it was just as crucial a century ago, when the great powers competed to control and expand their empires. In News from Germany, Heidi Tworek uncovers how Germans fought to regulate information at home and used the innovation of wireless technology to magnify their power abroad.”

“In 1926, 90% of all newspapers had no correspondents abroad or in Berlin. They received all their national and international news through news agencies or syndicate services. Today, we worry about whether Facebook or Google hold monopolies over information provision. New agencies exerted an arguable even greater grasp over national and international news in the first half the 20th Century.

“In the second half of the 20th century, newspaper ownership seemed like license to print money. Newspapers averaged annual returns of in the United States. Some newspapers generated profits of 30%. In comparison, grocery store profits were in the 2% range and department stores around 4%. In non-exceptional periods, when profits are hard to come by, companies become more reliant on the state or more susceptible to outside control The problem of profits has long made news firms likelier to participate in business arrangements like cartels and monopolies as well as more open to outside influences..

“When elites no longer believe in upholding democratic institutions, a free press alone could not stop a democracy’s disintegration. Democracy can die in full daylight, and has done before.”

[The book, 2019, has received the Fraenkel Prize from the Wiener Holocaust Library and the Ralph Gomory Prize from the Business History Conference and the Alfred P. Sloan Foundation.]

Economic Crisis and Political Extremism in Europe: From the 1930s to the Present

Historical experience shows that when economic conditions remain bad for a significant period of time people tend to become more radical as far as their electoral behaviour is concerned. However, no matter how strong the linkage between economic crisis and the rise of political extremism might be, economic crisis is not the only factor to be taken into account when analysing the phenomenon of political extremism, as other parameters (historical, social and so on) are also important.

The economic crisis of the 1930s had a profound effect on European politics. The vicious circle of underdevelopment, unemployment and poverty that started in 1929 created massive social problems and thus favoured the strengthening of extremist parties, especially far-right ones (Table 1). The case of Germany was probably the most characteristic and definitely the most important one as far as its long-term consequences were concerned. Before 1929 Adolf Hitler’s National Socialist party was nothing more than a marginal political force. In the German federal elections of May 1928 they won only 2.63 % of the vote. Just two and a half years later, in September 1930 they secured 18.25 %. In the elections of July 1932 they came first with 37.27 %, a place that they managed to hold in November of the same year despite the fact that their share of the vote was reduced to 33.09 % (Gonschior 2005). On 30 January 1933 Hitler became chancellor of Germany and gradually began to impose his dictatorial and racist regime. The Weimar Republic was dead. Europe was, little by little, sliding towards the abyss of the Second World War.

The establishment of Benito Mussolini’s FASCIST regime in Italy in 1922 had already paved the way towards the dominance of political extremism. However, it was only in the 1930s that anti-democratic parties across Europe became more successful.

As in the 1930s, today most far-right extremists promise to overthrow the established political system. In general, they describe politicians (excluding themselves, of course) as corrupt and decadent. They take advantage of the mass media (with special emphasis on social media which give them the opportunity to attract the attention of younger audiences) in order to get their messages across. They make extensive use of stereotypes to address the public and they use black-and-white arguments which, despite their poor reasoning, sound reasonable to the average voter. They are conservative on societal issues and sometimes openly homophobic. They reject liberal ideas and they have racist tendencies. They underline the threat of the expansion of Islam in Europe, while at the same time some of them are anti-Semitic. They point to immigrants as one of the main causes (if not the main cause) of all sorts of problems, from unemployment to high criminality. In some cases, they do not disapprove of and talk with respect or even admiration about FASCIST and Nazi leaders of the past. There are also those who do not hesitate to resort to violence in order to intimidate others.

Trust in governments around the world is collapsing, especially in democracies, Axios Media Trends author Sara Fischer writes from a new global survey.

Government leaders and journalists are the least-trusted societal leaders, according to Edelman’s 2022 global “Trust Barometer,” a survey of 35,000 respondents in 28 countries.

[Trust in neighbors and co-workers has apparently ⬆️.]

Since the insurrection on January 6, warnings of a second American Civil War have been sounded. This week, On the Media explores whether the civil war talk is an alarmist cry, or actually a sober assessment. Plus, hear how the myth of “the Dark Ages” paints an unfair portrait of medieval times.

1. David Remnick, editor of The New Yorker and host of the New Yorker Radio Hour, on the risk of second civil war. Listen.

“In the current context, is ‘Civil War’ a metaphor, a proposed diagnosis for what ails our country? Or is it meant to be taken literally? In a recent essay in The New Yorker, editor David Remnick suggests both. He writes that ‘for the first time in two hundred years, we are suspended between democracy and autocracy. And that sense of uncertainty radically heightens the likelihood of episodic bloodletting in America, and even the risk of civil war.’ Remnick tells Brooke about the value of ‘a journalism of warning,’ and why cautions of civil war should be heeded. -OTM

2. Barbara Walter [@bfwalter], professor of International Relations at the University of California, San Diego, on the tell-tale signs that a country is headed for insurgence. Listen. 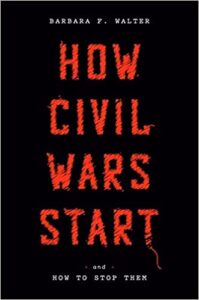 “To a subset of the White population here this is deeply, deeply threatening… They see the United States as a White Christian country. And they feel like they’re justified to fight to maintain it.”

“Sadly, if we remain ignorant about how power operates in American politics, then people with nefarious purposes will step in and take it away from us. It’s why a civics curriculum in schools would create a stronger electorate and lead to greater faith & trust in the system.”

‘Everybody thought their civil war was unique,’Barbara F. Walter writes in her new book, How Civil Wars Start: And How To Stop Them. ‘So no one saw the risk factors that emerged again and again no matter where war broke out.” According to Walter, who has studied civil wars around the world for the past three decades — from Syria to Northern Ireland to Sri Lanka — the same warning signs appear each time. And now Walter says she sees those same signs here, in the United States. This week, she discusses them with Brooke.” -OTM

Anocracy or semi-democracy: a form of government that is loosely defined as part democracy and part dictatorship, or as a “regime that mixes democratic with autocratic features.” … Such regimes are particularly susceptible to outbreaks of armed conflict and unexpected or adverse changes in leadership. [wikipedia]

According to Professor Walter, a new Civil War would not look like the old one… 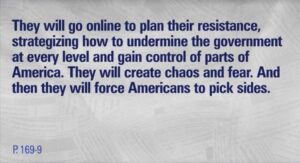 U.S. democracy downgraded in 2016 and 2019. “U.S. no longer deemed longest consistent democracy.” It is now Switzerland.

3. Charlie Warzel [@cwarzel], journalist and contributing writer at The Atlantic, on when journalists should sound the alarm (and how loud we should ring it). Listen.

“Since the anniversary of January 6th, the pundit industrial complex has been churning out new ‘takes’ on a possible civil war every day.  Could it be “like the summer of 2020, but 10 times bigger”, or ‘a Seinfeld civil war’— a war about nothing? Amid the noise, it has only become more difficult to determine the proper level of alarm. Journalist Charlie Warzel tried to help everyone calibrate in the latest installment of his newsletter for The Atlantic, Galaxy Brain. This week, Brooke and Charlie discuss the role of alarmism in the face of seemingly existential problems, and who the real ‘doomsayers’ actually are.

4. David M. Perry [@Lollardfish] and Matthew Gabriele [@prof_gabriele], authors of The Bright Ages: A New History of Medieval Europe, on how the Dark Ages might have not been so dark. Listen.

Today, when we encounter the medieval world it’s mostly a dark time. Un-enlightened by reason, but also literally gloomy – all bare stone and grey skies. We know it as a brutal time, dominated by white men with steeds and swords, or drenched in blood by marauding Vikings. But in their new book, The Bright Ages: A New History of Medieval Europe, historians Matthew Gabriele and David M. Perry trace the harm of the myths of the “Dark Ages,” and illuminate the medieval stories that have mostly escaped our modern gaze. -OTM 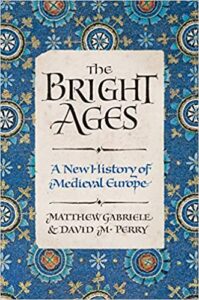 ‘This podcast takes you inside the world of ascendant Patriot Movement, the militia members & far-right activists who are simultaneously preparing to fight the government & become part of it.’ 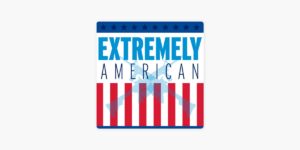 Voices of Freedom, edited/produced by me; see if you can the identify the speakers. -dayle 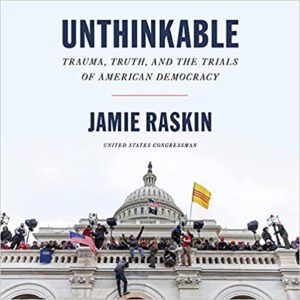 ‘Congressman Jamie Raskin has proudly represented Maryland’s 8th Congressional District in the U.S. House of Representatives since 2017. Prior to his time in Congress, Raskin was a three-term State Senator in Maryland and the Senate Majority Whip. He was also a professor of constitutional law at American University’s Washington College of Law for more than 25 years.’

[His book is #1 this week on the NYTimes hardcover non-fiction Best Seller’s List.]

“I have learned that trauma can steal everything from you that is most precious and rip joy right out of your life,” Raskin writes. “But, paradoxically, it can also make you stronger and wiser, and connect you more deeply to other people than you ever imagined by enabling you to touch their misfortunes and integrate their losses and pain with your own.”

“If a person can grow through unthinkable trauma and loss,” Raskin continues, “perhaps a nation may, too.” [NPR]

“When everything looks hopeless, you are the hope.”